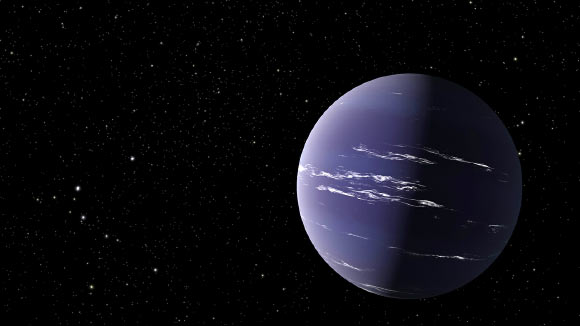 An artist’s rendering of the Neptune-like exoplanet TOI-1231b. Image credit: NASA / JPL-Caltech.
TOI-1231 is a M3-type star located 90 light-years away in the southern constellation of Vela.
NLTT 24399, L 248-27, and 2MASS J10265947-5228099, the star is about two times smaller and less massive than our Sun.
The newfound planet, designated TOI-1231b, orbits its star once every 24.3 days.
The alien world is 3.65 times the radius of the Earth and about 15.4 times as massive.
“Even though TOI-1231b is eight times closer to its star than the Earth is to the Sun, its temperature is similar to that of Earth, thanks to its cooler and less bright host star,” said Dr. Diana Dragomir, an astronomer in the Department of Physics and Astronomy at the University of New Mexico.
“However, the planet itself is actually larger than Earth and a little bit smaller than Neptune — we could call it a sub-Neptune.”
With a temperature around 330 K (57 degrees Celsius, 135 degrees Fahrenheit), TOI-1231b is one of the coolest, small exoplanets accessible for atmospheric studies discovered thus far.
“TOI-1231b is one of the only other planets we know of in a similar size and temperature range, so future observations of this new planet will let us determine just how common (or rare) it is for water clouds to form around these temperate worlds,” said Dr. Jennifer Burt, an astronomer at NASA’s Jet Propulsion Laboratory.
“The low density of TOI-1231b indicates that it is surrounded by a substantial atmosphere rather than being a rocky planet,” Dr. Dragomir added.
“But the composition and extent of this atmosphere are unknown!”
“TOI-1231b could have a large hydrogen or hydrogen-helium atmosphere, or a denser water vapor atmosphere.”
“Each of these would point to a different origin, allowing astronomers to understand whether and how planets form differently around M dwarfs when compared to the planets around our Sun, for example.”
TOI-1231b was detected using photometric data from TESS and followed up with observations from the Las Cumbres Observatory and the Antarctica Search for Transiting ExoPlanets program.
“This new planet we’ve discovered is still weird — but it’s one step closer to being somewhat like our neighborhood planets,” Dr. Burt said.
“Compared to most transiting planets detected thus far, which often have scorching temperatures in the many hundreds or thousands of degrees, TOI-1231b is positively frigid.”
“This planet joins the ranks of just two or three other nearby small exoplanets that will be scrutinized with every chance we get and using a wide range of telescopes, for years to come so keep an eye out for new TOI-1231b developments,” Dr. Dragomir said.
A paper reporting the discovery will be published in the Astronomical Journal.
_____
Jennifer A. Burt et al. 2021. TOI-1231 b: A Temperate, Neptune-Sized Planet Transiting the Nearby M3 Dwarf NLTT 24399. AJ, in press; arXiv: 2105.08077