New York (CNN Business)John McAfee, the controversial antivirus software magnate who'd had multiple recent run-ins with the US law, has died at 75. McAfee was awaiting extradition in a Spanish prison after being charged with tax evasion in the United States last year.
McAfee was found dead in his cell in a prison near Barcelona on Wednesday around 1 p.m. ET and a medical examiner went to the scene, a spokeswoman for the Superior Court of Catalonia told CNN. She said the cause of death is under investigation.
A statement from the Catalonia regional government Justice Department, which manages prisons there, said that prison medical personnel and guards attempted to perform life-saving procedures after finding McAfee, but were unsuccessful. The statement said "everything indicates" that McAfee could have died by suicide.
His death came after a ruling from a three-judge panel at Spain's National Court in Madrid this week that McAfee could be extradited to the United States to face charges there. That decision could still have been appealed to a larger panel of judges at the same court, according to court documents.
McAfee had a cell mate at the prison, but that person was not in the cell around the time that McAfee was found dead, a prison official, who asked not to be named, told CNN. The official added the other person was out doing other normal activities at the prison. Asked if authorities had imposed special monitoring measures on McAfee in his cell, the official said, "I'm not aware of that."
McAfee was arrested in Spain in October after being indicted in the United States for tax evasion months earlier. He allegedly failed to file taxes for four years despite earning millions in income between 2014 and 2018 from promoting cryptocurrencies, consulting work, speaking engagements, and selling the rights to his life story for a documentary, according to court documents. The amount he owed was not specified in the indictment.
The Spanish judges approved his extradition to face charges for the 2016, 2017 and 2018 tax years.
In a virtual hearing in Spanish court earlier this month, McAfee argued that the US tax evasion charges against him were politically motivated, the Associated Press reported.

John McAfee facing charges for alleged cryptocurrency 'pump and dump' scheme on Twitter
McAfee — founder of the eponymous antivirus software firm, with which he is no longer affiliated — was also indicted in March on separate fraud and money laundering charges. The US Department of Justice alleged that he and a business partner participated in a scheme that earned more than $13 million by falsely promoting cryptocurrencies to unwitting investors.
The final two decades of McAfee's life included a somewhat bizarre series of events.
In 2012, McAfee briefly vanished after fleeing his home in Belize because local police tried to question him on the death of his neighbor. (He has denied involvement in the death and claimed he fled because he feared for his life.)
He spent time in Guatemala, and then moved to Montreal, Canada, where he worked on a documentary about his life. He ran for US president in 2016 as a Libertarian, and launched a new security product that he called "a f---ing game changer."

John McAfee Repeatedly Warned He Would Be ‘Suicided’ In Jail ‘A La Epstein,’ Called Out ‘Deep State’ Days Before Arrest

Posted by Lou on June 24, 2021
Posted in: Uncategorized. Leave a comment

“Know that if I hang myself, a la Epstein, it will be no fault of mine,” McAfee promised after being thrown in jail 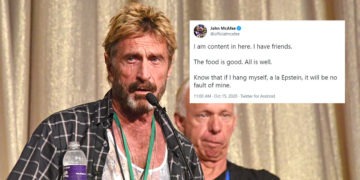 John McaFee, the antivirus pioneer, cryptocurrency advocate, and former libertarian U.S. presidential candidate who was found dead in a Spanish jail cell on Wednesday, repeatedly warned supporters that he believed he would killed by the U.S. government while in jail via an assassination staged as a suicide. Local authorities have claimed that the 75-year-old’s death “looks like a suicide.”

On November 30, 2019, Mcafee tweeted, “Getting subtle messages from U.S. officials saying, in effect: “We’re coming for you McAfee! We’re going to kill yourself”. I got a tattoo today just in case. If I suicide myself, I didn’t. I was whackd. Check my right arm.” A photo accompanying the tattoo showed a tattoo on McAfee’s arm titled ‘WHCKD,” a cryptocurrency Mcafee had launched to draw attention to the “suicide” of Jeffrey Epstein in jail earlier that year.
“I am content in here. I have friends. The food is good. All is well. Know that if I hang myself, a la Epstein, it will be no fault of mine,” McAfee wrote from jail in October 2020, following his arrest in a Spanish airport.
ohn McAfee

Getting subtle messages from U.S. officials saying, in effect: "We're coming for you McAfee! We're going to kill yourself". I got a tattoo today just in case. If I suicide myself, I didn't. I was whackd. Check my right arm. $WHACKD available only on http://McAfeedex.com:) 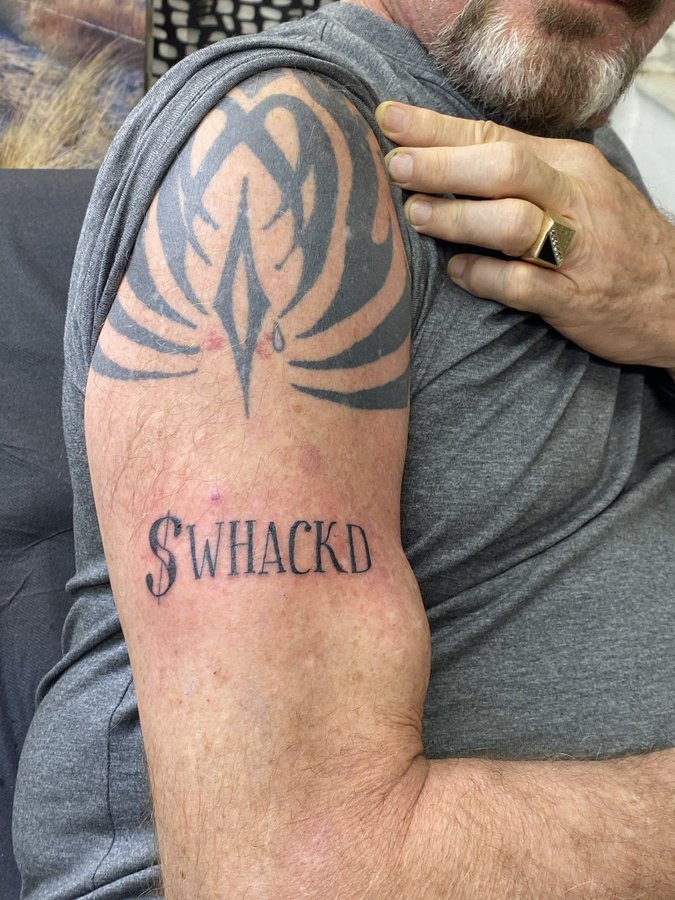 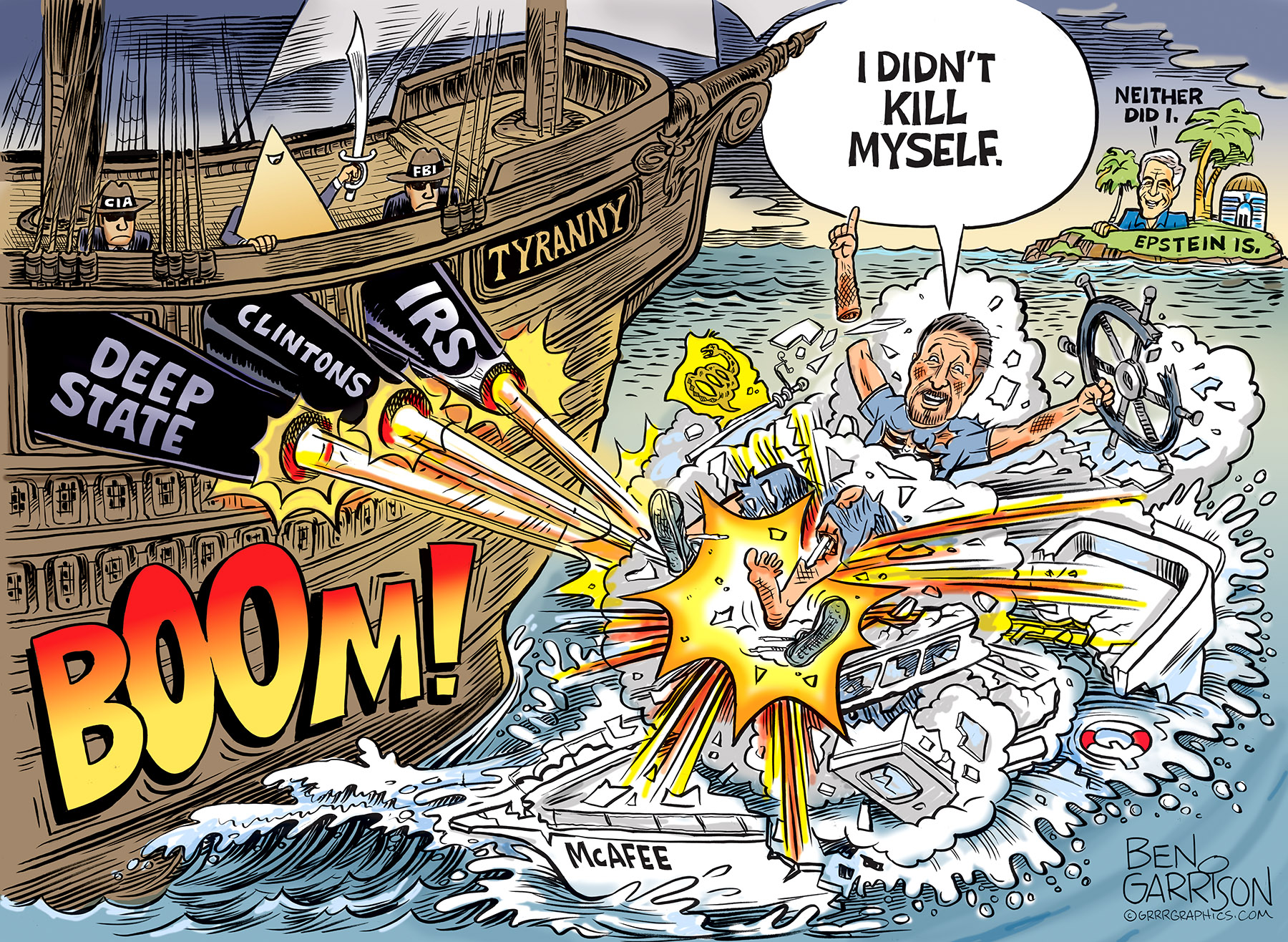