OUT OF MIND » BREAKING NEWS & HOT TOPICS » COVID-19 » Fauci Claims Spread of Virus by Unvaxxed Will Lead to More Dangerous Variants, but Experts Say Opposite Is True

Fauci Claims Spread of Virus by Unvaxxed Will Lead to More Dangerous Variants, but Experts Say Opposite Is True

Fauci Claims Spread of Virus by Unvaxxed Will Lead to More Dangerous Variants, but Experts Say Opposite Is True Fri Aug 13, 2021 9:26 am

Fauci Claims Spread of Virus by Unvaxxed Will Lead to More Dangerous Variants, but Experts Say Opposite Is True

In an interview with The Defender, Dr. Robert Malone, inventor of mRNA and DNA vaccines, world-wide expert in RNA technologies and Harvard-trained physician, said there’s an agenda for universal vaccination that is not scientifically sound. 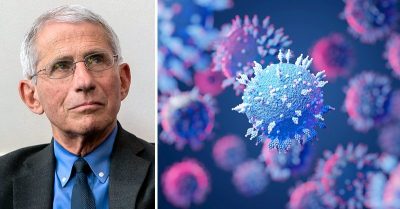 ***
Dr. Anthony Fauci said the continued spread of COVID among the unvaccinated could lead to a more serious disease, but Dr. Robert Malone, Harvard-trained physician and inventor of mRNA vaccine technology told The Defender Fauci is wrong.
Dr. Anthony Fauci on Sunday said the continued spread of COVID among the unvaccinated could lead to a more serious disease.
Fauci, director of the National Institute of Allergy and Infectious Diseases (NIAID), told viewers of NBC’s “Meet the Press”:
“As we’ve said all along this is fundamentally a pandemic among the unvaccinated. That is proven true … One of the problems … is you don’t want people to get sick and to get hospitalized and to die. That is happening now predominantly — overwhelmingly — among the unvaccinated.”
Fauci told viewers the vaccines “do quite well against Delta particularly in protecting you from severe disease.” But if you “give the virus the chance to continue to change,” he said, “we might get a worse variant and then that will impact not only the unvaccinated, that will impact the vaccinated because that variant could evade the protection of the vaccine.”
Some experts disagree.
In an interview with The Defender, Dr. Robert Malone, inventor of mRNA and DNA vaccines, world-wide expert in RNA technologies and Harvard-trained physician, said there’s an agenda for universal vaccination that is not scientifically sound.
“Tony Fauci is not an epidemiologist,” Malone said. “He does not have an MPH [Masters in Public Health]. He is not trained in this. Moderna is the first vaccine that has ever come out of NIAID that has even come close to licensure.”
Malone said:
“They’ve completely failed to develop an AIDS vaccine. They failed to develop a West Nile vaccine and a Zika vaccine. Every time there’s an outbreak, Fauci goes to Congress and requests a bunch of money to create a vaccine and this is his first big win. They just seem to be dug in that universal vaccination is the only solution.”
According to Malone, Fauci has rolled out the “noble lie.” The noble lie is that we have to reach herd immunity for economic recovery and to minimize death and disability, and these genetic vaccines are the only path available to herd immunity and these genetic vaccines are perfectly safe.
Each of these statements are demonstrably false, Malone said.

OK, time for another one of these. My positions - 1) bioethics require full risk disclosure and free choice. Neither of these are being met. 2) For high risk populations, the risk/benefit ratio for the USA vaccines seem to make sense. 3) We do not know all the risks yet.
6:43 AM · Jul 19, 2021


The breakthrough crisis really came to a head when The Washington Post obtained and reported on a Centers for Disease Control and Prevention (CDC) slide deck, Malone said.Scientist: ‘What We’re Seeing Is Virus Evolution 101’ — Delta Variant More Transmissible, Not More Deadly
According to the leaked CDC data, 15% of those hospitalized for COVID were fully vaccinated as of May. The number was just 3.1% in April.
Malone said the CDC data make it clear that even if we had complete uptake in vaccines and complete masking, at best we can slow the spread of Delta but we can’t stop it.
Malone, who believes death and disability still warrant vaccination in high risk populations, subscribes to Dr. Geert Vanden Bossche’s theory that continued mass vaccination campaigns will enable new, more infectious viral variants.
“Geert Vanden Bossche — I am on board with that now,” Malone said, “That we really shouldn’t be doing universal vaccination because we’re just going to be generating escape mutants.”
Vanden Bossche is a virologist and vaccinologist who worked with GSK Biologicals, Novartis Vaccines, Solvay Biologicals, Bill & Melinda Gates Foundation’s Global Health Discovery team in Seattle and Global Alliance for Vaccines and Immunization in Geneva.
In March, Vanden Bossche said:
“There can be no doubt that continued mass vaccination campaigns will enable new, more infectious viral variants to become increasingly dominant and ultimately result in a dramatic incline in new cases despite enhanced vaccine coverage rates. There can be no doubt either that this situation will soon lead to complete resistance of circulating variants to the current vaccines.”
He continued:
“A combination of lockdowns and extreme selection pressure on the virus induced by the intense global mass vaccination program might diminish the number of cases, hospitalizations and deaths in the short-term, but ultimately, would induce the creation of more mutants of concern — known as “immune escape.”
This will trigger vaccine companies to further refine vaccines that will add to the selection pressure, producing ever more transmissible and potentially deadly variants.
Vaccine breakthrough cases increase across U.S.
The CDC’s latest breakthrough numbers, as of Aug. 2, show 7,525 fully vaccinated people with COVID breakthrough cases. Of those, 7,525 people, 7,101 were hospitalized and 1,507 people died.
A breakthrough case refers to anyone who is diagnosed with COVID after being fully vaccinated. A person is considered fully vaccinated two weeks after receiving the second dose of either the Pfizer or Moderna COVID vaccine, or two weeks after receiving the single-dose Johnson & Johnson (J&J) vaccine.

CDC: 3,907 hospitalizations + 750 deaths in people fully vaccinated against COVID with an FDA-authorized vaccine as of June 21.

4,115 Fully Vaccinated Have Been Hospitalized or Died With Breakthrough COVID Infections, CDC Says
The Centers for Disease Control and Prevention reported 3,907 hospitalizations and 750 deaths in people fully vaccinated against COVID with an FDA-authorized vaccine as of June 21.

In May, the CDC revised its guidance for reporting breakthrough cases, stating it would count only those cases that result in hospitalization or death. Previously, the agency had included in its breakthrough count anyone who tested positive for COVID.
According to the CDC, the surveillance system for breakthrough cases is passive and relies on voluntary reporting from state health departments, which may not be complete. In addition, some breakthrough cases will not be identified due to lack of testing. This is particularly true in instances of asymptomatic or mild illness, the CDC said.
The Oregon Health Authority released COVID vaccine breakthrough data Aug. 6, recording a total of 4,196 breakthrough cases through July 31.
In July, there were 12,514 total cases of COVID in Oregon with one out of every five (19%) occurring in people who were fully vaccinated, according to the Oregon Health Authority.
About 1 in 10 severe cases of COVID requiring hospitalization or resulting in death occurred in individuals who were vaccinated. Out of 55 COVID related deaths, 9% occurred in individuals who were vaccinated.
According to the Arizona Department of Health Services, 11% of the new COVID cases in July were breakthrough cases — an increase from 5% in May and 8% in June. The state health department said the efficacy of Pfizer and Moderna is about 90%, so the numbers are not unexpected even though the percentage of cases is rising.
New data from the Massachusetts Department of Public Health (DPH) showed 100 people who had been fully vaccinated died of COVID in the state by the end of July. In about three-quarters of the breakthrough cases, patients reported having underlying conditions, DPH said. The median age of those who died was 82.5 years.
According to a CDC study from Aug. 6, 469 COVID cases were identified among residents of Barnstable County, Massachusetts with 436 cases (74%) occurring in people who were fully vaccinated.
The Louisiana Department of Health (LDH) released data held secret for months about which COVID vaccines produced the most breakthrough cases, WBRZ reported.
The data released Friday by LDH after a series of requests from the WBRZ Investigative Unit showed among fully vaccinated people with breakthrough infections and who had  severe health outcomes such as hospitalization or death, 41% received Moderna, 52% received Pfizer and 6% received Johnson and Johnson’s COVID vaccine.
LDH reiterated that in its statement: “The number of people who received each type of vaccine is not equal… [so many factors in the data] further cloud any conclusions one can draw from these numbers.”
Between July 22 and July 28, 10% of new cases that week were breakthrough cases. In that same period, 16% of deaths occurred in people who had been vaccinated.
Of 422 people hospitalized in Baton Rouge hospitals as of Aug. 6, 59 were fully vaccinated.
Correction: This piece has been updated to include the number of people that have been hospitalized, according to the CDC’s latest breakthrough numbers, as of Aug. 2.
*
Note to readers: Please click the share buttons above or below. Follow us on Instagram, @crg_globalresearch. Forward this article to your email lists. Crosspost on your blog site, internet forums. etc.
Megan Redshaw is a freelance reporter for The Defender. She has a background in political science, a law degree and extensive training in natural health.
Featured image is from CHD

OUT OF MIND » BREAKING NEWS & HOT TOPICS » COVID-19 » Fauci Claims Spread of Virus by Unvaxxed Will Lead to More Dangerous Variants, but Experts Say Opposite Is True