Source:  Jacob Engels
On Saturday, in downtown Orlando, this Gateway Pundit journalist documented hundreds of citizens marching in support of the medical freedoms of first responders in Orange County, who have been ordered by the far-left Mayor of Orange County to get vaccinated… OR ELSE.
Mayor Jerry Demings, the husband of House Impeachment Manager and known Trump-hater Val Demings, instituted the order last month despite Orange County Firefighters and other first-responders giving impassioned testimony imploring him to respect their medical choice and freedoms. Since Demings’ decree, Florida Governor Ron Desantis has made it clear that he will impose $5,000 fines per instance for any government agency or private business forcing vaccinations on their employees.
Despite the the fact that the Florida court system has upheld DeSantis’ order while they review it further, several counties, including Orange County have no plans on obeying the Governor’s executive order or the court’s ruling.
Saturday’s rally was one of hundreds of rallies held around the world protesting lockdowns and mandates, billed a “Worldwide Freedom Rally”. The crowd was diverse in their political views, with this journalist noticing dozens of activists who have been fixtures at left-wing gatherings over the past few years joining forces with right-leaning groups in demanding citizens retain absolute choice when it comes to matters concerning their personal health. 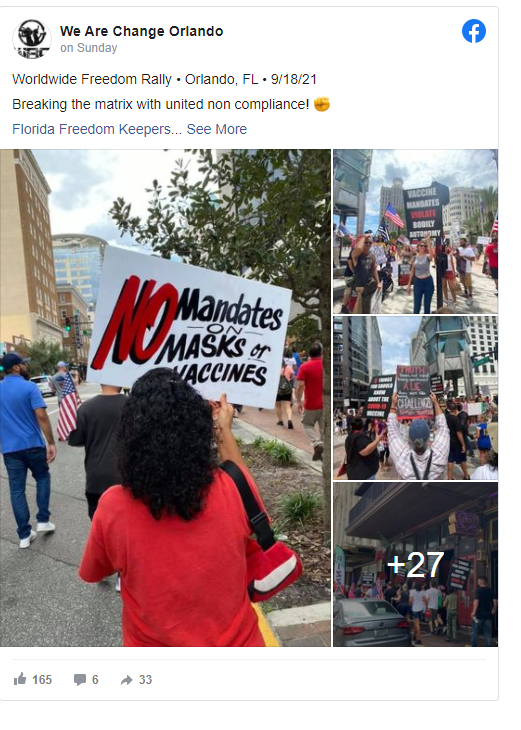 Justin Harvey, of We Are Change Orlando, helped organize the event along with the Freedom Keepers, members of the Orange County Fire Department and congressional candidate Jeremy Liggett. No mainstream media in the Central Florida area, from local broadcast news to the Orlando Sentinel covered the massive gathering, creating a media blackout in hopes of stymieing the groundswell of support in the community for medical freedoms and choice.

“We want to show support for our first responders when it comes to their bodily autonomy. They shouldn’t have their job held over the heads because of this. This is our focus right now, but we will be looking at recalling Orange County Mayor Jerry Demings and other commissioners who have remained silent on this issue,” Harvey told TGP.

Dozens of community leaders and firefighters addressed the crowd at Lake Eola in Downtown Orlando, before peacefully marching through the streets of Orlando’s downtown corridor. Aside from the political diversity of the crowd, a large presence of school-aged children also exercised their first amendment rights, which is truly a sign of hope for future generations that are under assault by radical social justice teachings that have invaded our school systems.

The only confrontation of the afternoon came when a double-masked man, with two cameras strapped on his shoulder, began invading the personal spaces of parents as he took photos of the young children who were bravely standing up for the medical freedoms of their fellow Americans. Parents repeatedly asked him to stop taking photos and the Orlando Police Department eventually ejected him from outside Orlando City Hall.
Firefighters and other Orange County employees have until September 30th to comply with Mayor Demings deadline to get vaccinated and more protests of his forced vaccination efforts are planned in the lead up to that deadline.
TGP will continue to monitor this situation as it unfolds and update our readers on how Governor Ron Desantis responds to Florida governments or businesses that refuse to abide by the court order to pause forced vaccinations.

Well done for standing up to tyranny - about time!

Welcome smagoo1
Thanks for joining and commenting.
The sleepers being activated finally!

» Ukraine: Hundreds march in Kiev on International Peace Day
» Hundreds Gather to Defy NYC Covid Mandates…”We will not comply!” about time! but only 100's?
» Police in Paris have joined the march against Covid mandates
» “We Will Not Comply!” – Thousands March Against Covid Vaccine Mandates in NYC
» Hundreds of thousands march against austerity in Portugal