Source: Richard Moorhead
Tesla and SpaceX CEO Elon Musk took a shot at President Joe Biden on Sunday, with Musk noticing that Biden declined to congratulate the crew of a private spaceflight SpaceX had completed. 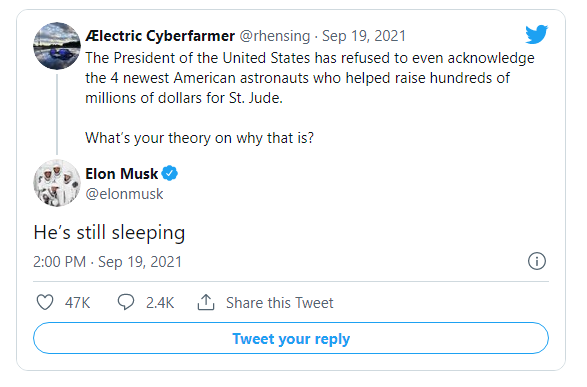 The SpaceX mission arranged for four crew members to orbit the earth for three days in a Crew Dragon capsule, returning to Earth on Saturday night and landing in the ocean off of the coast of Florida.
Biden had earlier declined to congratulate globalist oligarch Jeff Bezos for staging a photo op space mission in July, with the President likely skeptical of private spacetravel with questionable scientific or research merit.
However, Musk’s SpaceX mission does appear to have raised more than $200 million in charity funds for St. Jude’s Research Hospital, proving to be more gainful for society than Bezos’ narcissism flight. Musk, a billionaire many times over, announced he would contribute $50 million to the charity drive on Sunday.

Musk later went on to knock Biden for his support of the United Auto Workers union, comparing the organization to a facehugger xenomorph from the 1979 science fiction horror movie Alien.

The Biden administration has had somewhat of a tenuous relationship with Tesla, the United States’ biggest manufacturer of electric vehicles, even as the White House promotes the concept for environmentalist purposes. Musk, somewhat skeptical of the Democratic Party and establishment liberals, contrasts with the staunch corporate Democrat views of major American billionaires and CEOs.