Samoan Medicinal Plant May Be as Effective as Ibuprofen, Study Says

Samoan Medicinal Plant May Be as Effective as Ibuprofen, Study Says 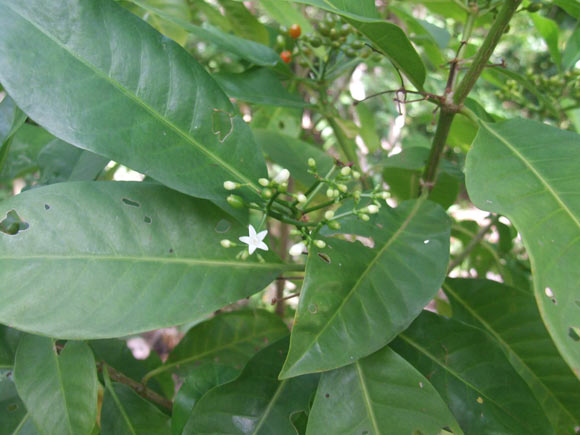 Psychotria insularum. Image credit: Victoria University of Wellington.
Compounds from natural resources are reliable lead templates of new pharmaceuticals, having persisted through evolutionary selection to control fundamental molecular pathways.
Of the 1,562 newly approved drugs from 1981 to 2019, 64% were either natural products, derived from natural products, or based upon natural product scaffolds, biological macromolecules, or botanical drugs.
Psychotria insularum is a small tree approximately 2 m in height with small white flowers and glossy red berries.
Known locally as matalafi, the homogenate of Psychotria insularum leaves is used in Samoan traditional medicine to treat inflammation associated with fever, body aches, swelling, wounds, incontinence, skin infections, elephantiasis, vomiting, respiratory infections, and abdominal distress.
“Matalafi is used in two ways in Samoa: to treat illnesses attributed to ghosts, and to treat various forms of inflammation,” said indigenous Samoan Dr. Seeseei Molimau-Samasoni, a researcher at the Scientific Research Organisation of Samoa and the Victoria University of Wellington.
“We used chemical genomic analyses in the model organism Saccharomyces cerevisiae (baker’s yeast) to identify and characterize an iron homeostasis mechanism of action in the traditional medicine as an unfractionated entity to emulate its traditional use.”
The researchers found that matalafi interacts with the iron within cells of the body.
They identified bioactive compounds — namely rutin and nicotiflorin — which both act to bind iron in a process called iron chelation.
They also found that matalafi exhibits anti-inflammatory activity remarkably similar to that of ibuprofen.
Iron chelators like matalafi also have the potential to treat iron overload associated with transfusions, and have also been identified as prospective agents against common diseases like cancer, neurodegenerative diseases, cardiovascular diseases, and diabetes.
“This raises the possibility for applications of matalafi beyond traditional use,” said Dr. Helen Woolner, a researcher at the Victoria University of Wellington.
“Our findings also highlighted the sensitivity of the RIM101 gene deletion to the Psychotria insularum homogenate,” said Dr. Andrew Munkacsi, also from the Victoria University of Wellington.
“This gene is a major regulator of lipotoxicity which underlies obesity.”
“Also, molecular studies published last year predicted rutin as a strong contender in inhibiting the viral replication of the SARS-CoV-2 virus that causes COVID-19.”
“This project is unique in integrating traditional knowledge with different types of biological and chemical methodologies,” Dr. Molimau-Samasoni said.
The findings were published in the Proceedings of the National Academy of Sciences.
_____
Seeseei Molimau-Samasoni et al. 2021. Functional genomics and metabolomics advance the ethnobotany of the Samoan traditional medicine ‘matalafi.’ PNAS 118 (45): e2100880118; doi: 10.1073/pnas.2100880118