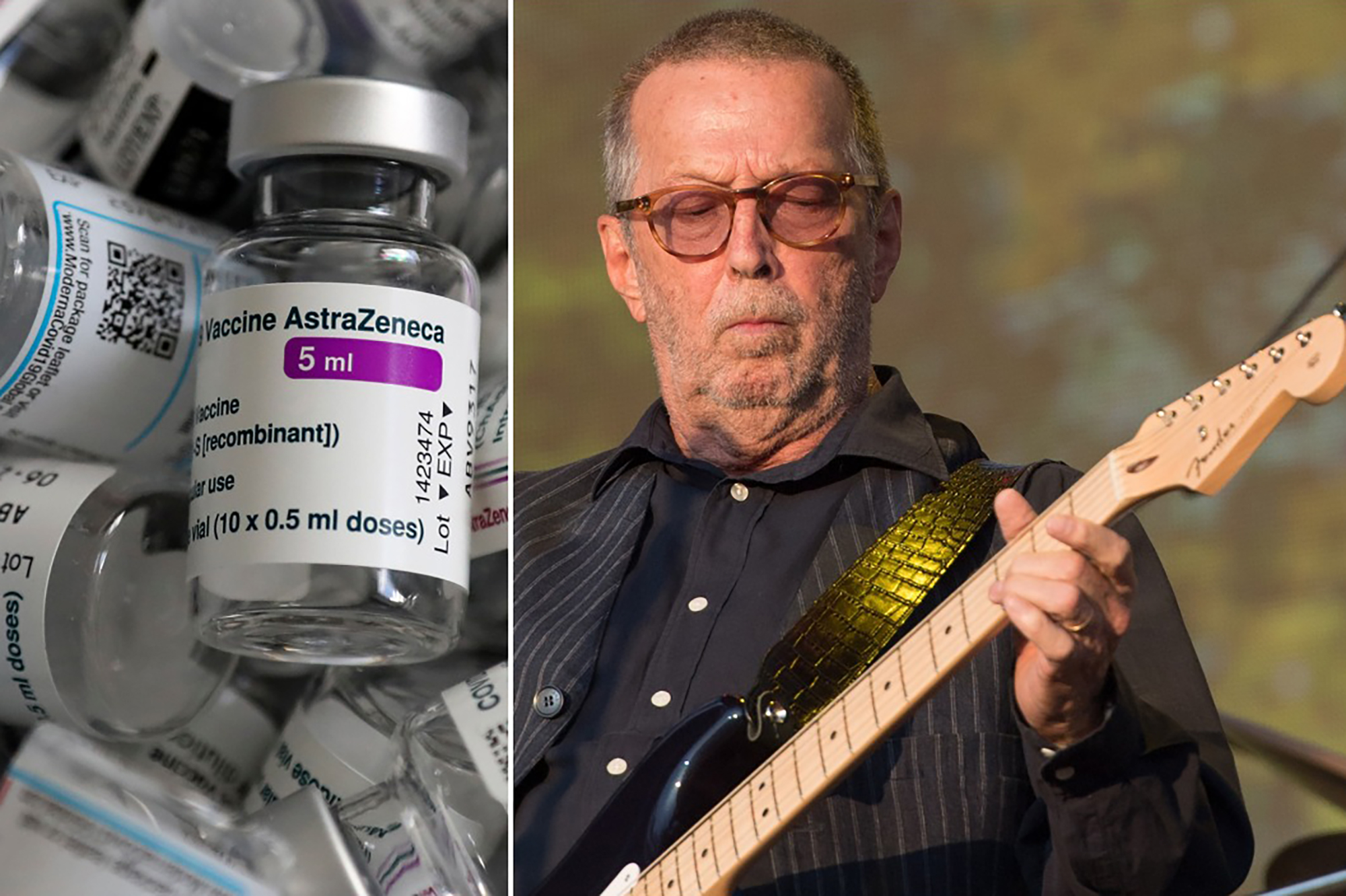 On “The Defender Show,” Robert F. Kennedy, Jr. talked with musician Eric Clapton about the backlash he experienced after going public with his COVID vaccine injury.
By
Children's Health Defense Team

Link copied
Miss a day, miss a lot. Subscribe to The Defender's Top News of the Day. It's free.


Eric Clapton, one of the most influential musicians of his time, is also now one of Robert F. Kennedy, Jr.’s heroes.
On CHD.TV’s “The Defender Show,” Kennedy and Clapton discussed the musician’s severe adverse reaction to the second dose of AstraZeneca’s COVID vaccine. The injury left Clapton permanently disabled, he said.
Clapton told Kennedy how he came upon “the rabbit hole” of vaccine information, and described what happened when he went public with his vaccine injury. He also shared why being sober helped him cope with the entire ordeal.
When Kennedy asked, “How did you walk into this buzz saw?” Clapton replied:
“Over the past year, there’s been a lot of disappearing, you know — little dust around with people moving away quite quickly. And it has, for me, refined the kind of friendships I have. And it’s dwindled down to the people that I obviously really need and love.
“And inside my family that became quite pivotal … I’ve got teenage girls and an older girl who’s in her thirties, and they’ve all had to kind of give me leeway because I haven’t been able to convince any of them. I think my wife is now seeing it the same way as me, but most of them, they’ve always thought I’m a crackpot anyway, because I do things that are extremely unusual on any kind of level.”

ORDER TODAY: Robert F. Kennedy, Jr.'s New Book — 'The Real Anthony Fauci'
On his latest song, “This Has Gotta Stop,” Clapton describes where he stands on worldwide vaccine mandates with these words:
“This has gotta stop,
Enough is enough
I can’t take this BS any longer.
“It’s gone far enough
If you wanna claim my soul
You’ll have to come and break down this door.”
After the media backlash, which included an article in Rolling Stone and numerous TV news reports, Clapton, who doesn’t watch television, said he “didn’t even know who these people were” and why the mainstream media was “picking on” him.
Kennedy said it’s encouraging to see hip-hop artists and other musicians come out against medical tyranny.
Clapton said, “Rock and roll got watered down a long time ago.” He said it used to be about being a rebel. “And now it’s much more to do with conformity,” he said.
Clapton said he feels a kinship with Americans and others who support medical freedom. He described some worthwhile musical partnerships on protesting government overreach, including “Stand and Deliver,” a collaboration with Van Morrison who is also being criticized for bucking the mainstream pandemic narrative.
Clapton said, “I’ve found people a bit like me, but it’s been difficult in the last couple of years, especially with, you know, mainstream media turning.”
On speaking to the media and causing a stir, Clapton said, “I couldn’t see what was so dangerous about it or risky.”

Double your impact! When you make a donation to Children's Health Defense, your donation will be matched — up to $2 million! Donate Now!
Kennedy empathized with the 76-year-old Clapton, who believed the warnings that older adults should get the COVID vaccine and booster shots. Kennedy said the pharmaceutical companies have infiltrated the media narrative on the safety of the COVID vaccine.
Kennedy said:
“You took the vaccine. You got hurt by the first one. You believe the propaganda. You took the second one, and you essentially got disabled. You spoke out about your injury and the whole world came down and gaslighted you and marginalized you and vilified you, because you got injured by that product. And here they come after you because you’re not allowed to talk about that. And that is the big problem. The way they’re coping with injuries from these vaccines is to pretend they don’t exist and to punish people who get injured and try to talk about it.”
Clapton said he didn’t know what he was getting into when he went public with vaccine injury.
He said:
“And that’s the thing. I didn’t know. I mean — the uncertainty surrounding this thing has been mammoth. I think everybody I know has got, what do they call it? CIS anxiety syndrome [clinically isolated syndrome], everybody I know is unsettled about it. And for me, it was heightened by the fact that I had these adverse reactions. The lifesaving part of it was I’d found a group of people who were inviting me to talk about it, because I couldn’t talk about anywhere. As you said, there was nobody listening, and it was very, very difficult to know what to do or how to, you know — I thought I was going crazy.”
Instead of letting those who disapproved of his public announcement get to him, he felt more empowered.
Clapton said:
“In fact, I felt more support as a result of this than I ever did before about anything — and I was always quite private about my beliefs and concerns, but the minute I got public with this and just told the truth — my truth, I suppose you could say — I could see really clearly what was real, genuine enthusiasm and relief and comfort from people that were feeling the same way.”
Kennedy asked Clapton how he finds peace when most of society is saying he’s “wrong, crazy and dangerous.”
Clapton said he has been sober for 34 years after finding success in a 12-step alcohol program. He said being sober helps him deal with everything — from “the engineering” of the pandemic to Brexit politics.
He said:
“That’s what I do. And so over the years that’s given me a lot more confidence in what I hear in myself.”
Clapton said he hasn’t been to a live 12-step meeting for almost two years. “But I do know this, I think the Zoom thing has made it difficult for people to get involved with recovery,” he said.
Kennedy talked about his own experience overcoming drug addiction, which he used to cope with his father’s death.
People need support when they experience trauma, Clapton and Kennedy agreed, much like talking about vaccine injury.
Clapton said:
“For me, the purpose of talking about my experience with the vaccine was so that someone in a room somewhere who was suffering side effects knew that he wasn’t the only one — because in England, nobody knows. If you talk to somebody about the Yellow Card system, which is the reportage of side effects, most people don’t even know it exists. It’s criminal, you know, that it has been withheld.”
Clapton said he believes it’s his calling now as much as anything else is to just stick out his neck and say, “Well, it happened to me. And if it happened to you, then you have to tell someone.”
Kennedy and Clapton ended on a hopeful note with a discussion of how to end the world’s trajectory toward totalitarianism. Kennedy touted the benefits of the Socratic method:
“You can’t persuade. You cannot go and say, ‘You have to listen to me.’ You have to ask some questions and say, ‘How does this work? Should we be vaccinating children? Is it permissible to vaccinate a child and put them at risk in order to save an adult life?’”
Watch Robert F. Kennedy, Jr. interview Eric Clapton here:

» Eric Clapton - This Has Gotta Stop
» DeSantis tells students to take off ‘ridiculous’ masks: ‘We’ve gotta stop with his Covid theater’
» Eric Clapton after COVID vaccination: ‘I should never have gone near the needle’
» Eric Clapton refuses to play venues requiring full vaccination
» Son Tells Mom to “Stop the Car!” – She Was Shocked …Then What She Saw Made Her Cry