"Give Republicans this: they're not dismantling democracy in secret. They're doing it right out in the open."

Wisconsin Republicans, at the urging of Sen. Ron Johnson, are pushing to unilaterally seize control over federal elections in the battleground state, an effort that observers warned is part of the GOP's multi-pronged assault on democracy in the wake of former President Donald Trump's defeat last year.
The New York Times reported Friday that the state Republican Party is taking "direct aim" at the bipartisan Wisconsin Elections Commission (WEC), an agency that the GOP established six years ago. According to the Times, "The onslaught picked up late last month after a long-awaited report on the 2020 results that was ordered by Republican state legislators found no evidence of fraud but made dozens of suggestions for the election commission and the GOP-led Legislature, fueling Republican demands for more control of elections."
"Then the Trump-aligned sheriff of Racine County, the state’s fifth most populous county, recommended felony charges against five of the six members of the election commission for guidance they had given to municipal clerks early in the pandemic," the Times noted. "The Republican majority leader of the state Senate later seemed to give a green light to that proposal, saying that 'prosecutors around the state' should determine whether to bring charges."
Meanwhile, Johnson—who repeatedly echoed Trump's false claims of voter fraud following the 2020 presidential contest—openly called on Wisconsin Republicans to take over the state's election system in an interview last week with the Milwaukee Journal-Sentinel, arguing that Democratic Gov. Tony Evers would be powerless to stop them.
"There's no mention of the governor in the Constitution [regarding election administration]," Johnson, a two-term senator up for reelection next year, told the local newspaper. "It says state legislatures, and so if I were running the joint—and I'm not—I would come out and I would just say, 'We're reclaiming our authority. Don't listen to WEC anymore. Their guidances are null and void.'"
"I think the state Legislature has to reassert, reclaim this authority over our election system," Johnson added.
President Joe Biden defeated Trump in Wisconsin by less than a percentage point in 2020.

Give Republicans this: they're not dismantling democracy in secret. They're doing it right out in the open.

Wisconsin Republicans Push to Take Over the State’s Elections
Led by Senator Ron Johnson, G.O.P. officials want to eliminate a bipartisan elections agency — and maybe send its members to jail.

Johnson's argument that state lawmakers have the legal authority to bypass Evers and take charge of federal elections in Wisconsin was "debunked by a 1932 Supreme Court decision and a 1964 ruling from the Wisconsin Supreme Court," the Times pointed out Friday.
"His suggestion was nonetheless echoed by Michael Gableman, a conservative former State Supreme Court justice who is conducting the Legislature's election inquiry," added the Times, which reported that Johnson is actively lobbying Wisconsin Republicans to act on his suggestions.
Ben Wikler, the chair of the Wisconsin Democratic Party, said the GOP's latest attacks on the state's elections show the severity of "what we're up against here in Wisconsin: Republicans who want to shred the elections administration system (which they set up!) so they can overturn results they don't like."
"Governor Evers is the last line of defense for our democracy—and we have to reelect him in 2022," Wikler added.
On Thursday, Evers vetoed Republican legislation that he warned would "solidify existing, gerrymandered voting maps for the next decade in the state of Wisconsin."
"As other politicians in this state abuse their power to try and predetermine our elections, as they try to create controversy where there is none, as they try to discredit the hard work of our election administrators and poll workers who helped ensure we had a free, fair, and secure election last November, I will not," the governor said in a video message.
Responding to the GOP's intensifying efforts to take over federal elections in Wisconsin, Evers said that "they're about making it more difficult for people to participate in the democratic process" and are "nothing more than a partisan power grab."
Sen. Tammy Baldwin (D-Wis.) echoed that message in a tweet on Friday.
"Let me be very clear: This is a blatant partisan power grab, meant to make it more difficult for Wisconsin residents to participate in our democracy," Baldwin wrote. "Elections in the Badger State are free, fair, and safe—because of our election officials." 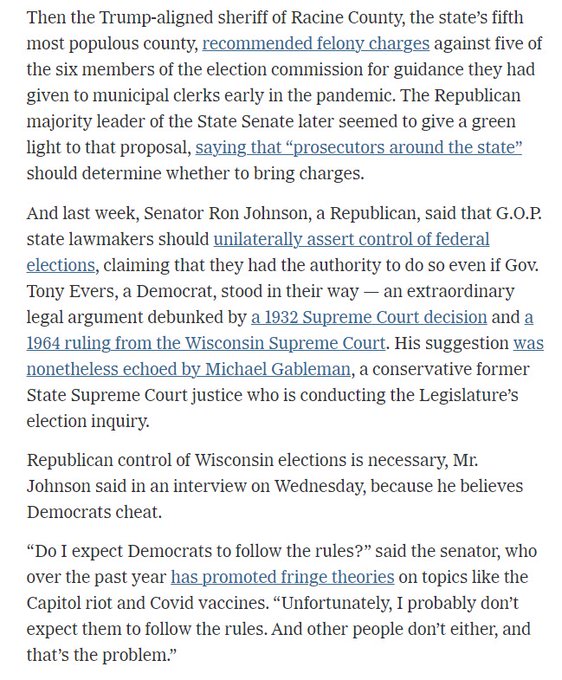 Like many other states across the country, Wisconsin expanded access to mail-in ballots in 2020 as a safety measure amid the coronavirus pandemic—a decision that state Republicans met with baseless warnings of fraud and abuse.
In the months since the 2020 presidential election, Wisconsin Republicans have pushed a slew of bills aimed at dramatically curtailing voting rights in the state. Evers has vetoed the GOP-authored measures that have reached his desk.
The Wisconsin GOP is hardly alone in attempting to gain greater power over elections and roll back ballot access. As the Washington Post's Philip Bump wrote Friday, "This effort to skew power to Republicans, including in the management of federal elections, has been a response also offered in other states where the right sees its power threatened."
"This is a future that Republicans are happy to embrace, one in which they might not get more votes but they get more power," Bump added.
Between January 1 and September 27 of this year, according to an analysis by the Brennan Center for Justice, at least 19 Republican-led states have "enacted 33 laws that make it harder for Americans to vote":

In an emerging trend, restrictive laws in four states—Georgia, Iowa, Kansas, and Texas—impose new or more stringent criminal penalties on election officials or other individuals. These new criminal laws will deter election officials and other people who assist voters from engaging in ordinary, lawful, and often essential tasks. People in Georgia can now be charged with a crime for handing out water or snacks to voters waiting in line at the polls. In Iowa and Kansas, people could face criminal charges for returning ballots on behalf of voters who may need assistance, such as voters with disabilities. And in Texas, election officials could face criminal prosecution if they encourage voters to request mail ballots or regulate poll watchers' conduct.

In an appearance on MSNBC Thursday, Mother Jones journalist Ari Berman said that "we need to see action from the federal government" in response to the GOP's far-reaching assault on voting rights, which has included extreme gerrymandering efforts in states across the country.
For months, Democrats in Congress have failed to pass sweeping voter protections due to opposition from a small number of right-wing lawmakers as well as the party's refusal to kill the Senate's 60-vote legislative filibuster, which Republicans have wielded to block debate on voting rights legislation.
"We're in a moment where there's no substitute for federal action on voting rights," said Berman. "We are in a 1965 moment for democracy. There was no substitute for the Voting Rights Act in 1965—you weren't going to out-organize voter suppression, you weren't going to out-litigate voter suppression. Congress had to step in and act. We're in a similar situation today."