Source: Zero Hedge
This is only the latest indication of just how easily influenced young people are by their teachers.
Even though young Americans are perhaps the least susceptible to SARS-CoV-2 as a group, the ever-rebellious young people of America have decided once again to follow their teacher and protest by staging classroom “walkouts” intended to disrupt the school day.


Just when their parents could finally breathe a sigh of relief now that in-person classes had finally resumed, the “long-suffering” young people have America have taken it upon themselves to mimic the bad behavior of their elders (in this case, the teachers who function as de facto babysitters for millions of young people today). In Chicago, where a teacher’s strike had only just ended, a small group of protesting students staged a walkout, complaining that they were dissatisfied with the additional health protocols the teachers union agreed to earlier this week, ending its standoff with the Chicago Public Schools district and Mayor Lori Lightfoot.

“I think CPS is listening, but I’m not sure they’ll make a change,” said Jaden Horten, a junior at Jones College Prep High School, during a rally at district headquarters that was attended by roughly 1,000 students, according to Reuters.

Student walkouts have occurred at schools across Chicago, and in scattered areas across the country.
For example, about 600 young people from 11 Boston schools participated in student walkouts there, according to the school district, which serves nearly 52K pupils. Many protesting students returned to classrooms later, while others went home following “peaceful” demonstrations. Fortunately for the district, it looks like these protests have petered out as the city’s climate-focused Mayor Michelle Wu, who rose to prominence as a public education activist, praised the young people for letting their voices be heard.
Amusingly, an online petition started by one Boston high school senior branded schools a “COVID-19 breeding ground” and called for a remote learning option. This had collected more than 8K signatures as of Friday morning.
Echoing the Chicago Teacher’s Union, the Boston Student Advisory Council, a group representing students that claim to have organized the walkout posted a series of “demands” on Twitter, including two weeks of online instruction and more stringent COVID-19 testing for teachers and students. The kids are even holding their own press conferences now.

Tomorrow! Just a reminder, please be safe during this time. This is a peaceful demonstration. Info on sign ups for testimonies and webinar links will be posted on our IG. @BSACbuzz 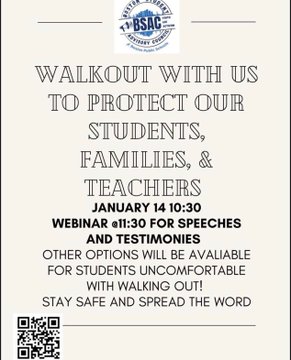 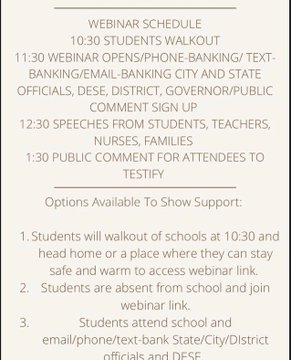 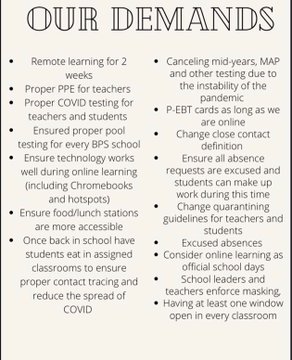 At least one student who spoke with a Reuters reporter said they no longer feel safe in school on account of them living with vulnerable grandparents.

Ash O’Brien, a 10th-grade student at Boston Latin School who left the building with about a dozen others on Friday, said he didn’t feel safe staying in school.
“I live with two grandparents who are immune-compromised,” he said. “So I don’t want to go to school, risk getting sick and come home to them.”
In a statement, Boston Public Schools said it supports students advocating for their beliefs and vowed to listen to their concerns.

The walkouts started in NYC, and have so far pushed Mayor Adams to consider a “temporary” remote learning option. But that’s about all of the “progress” the students can claim so far. https://ourworldindata.org/explorers/coronavirus-data-explorer?zoomToSelection=true&time=2020-03-01..latest&uniformYAxis=0&pickerSort=desc&pickerMetric=new_cases_smoothed_per_million&Metric=Cases+and+deaths&Interval=7-day+rolling+average&Relative+to+Population=true&Color+by+test+positivity=false&country=~USA&hideControls=true
So far, it appears that the omicron wave in the US might just be peaking, as cities, typically the locus of spread, have seen cases start to turn over.
Earlier this week, students at several New York City schools staged a walkout to protest what they said were inadequate safety measures. Mayor Eric Adams said on Thursday his administration was considering a temporary remote learning option for a significant number of students who were staying home.
So far, roughly 5K public schools across the country have closed for at least one day due to the pandemic according to one website that tracks school closures.

» WTF??? Virginia Officials Demand Students Get Vaccinations to Participate in ONLINE Learning from Home
» WorldWide Walk Outs!
» Thousands of Teachers, Students Walk Out of School in Protest of Vaccine Mandates + More
» Denver Students Stage Mass Walk-Out Over US History ‘Censorship’ – 25 September 2014
» Iraqi dinar would soon return to what it was prior to 1980 due to global demand: Banking and Finance Ministry Head