The stretch of green in front of the Lincoln Memorial was covered by a crowd stretching to the reflecting pool on the National Mall to protest the Biden administration’s embattled COVID-19 vaccine mandates. 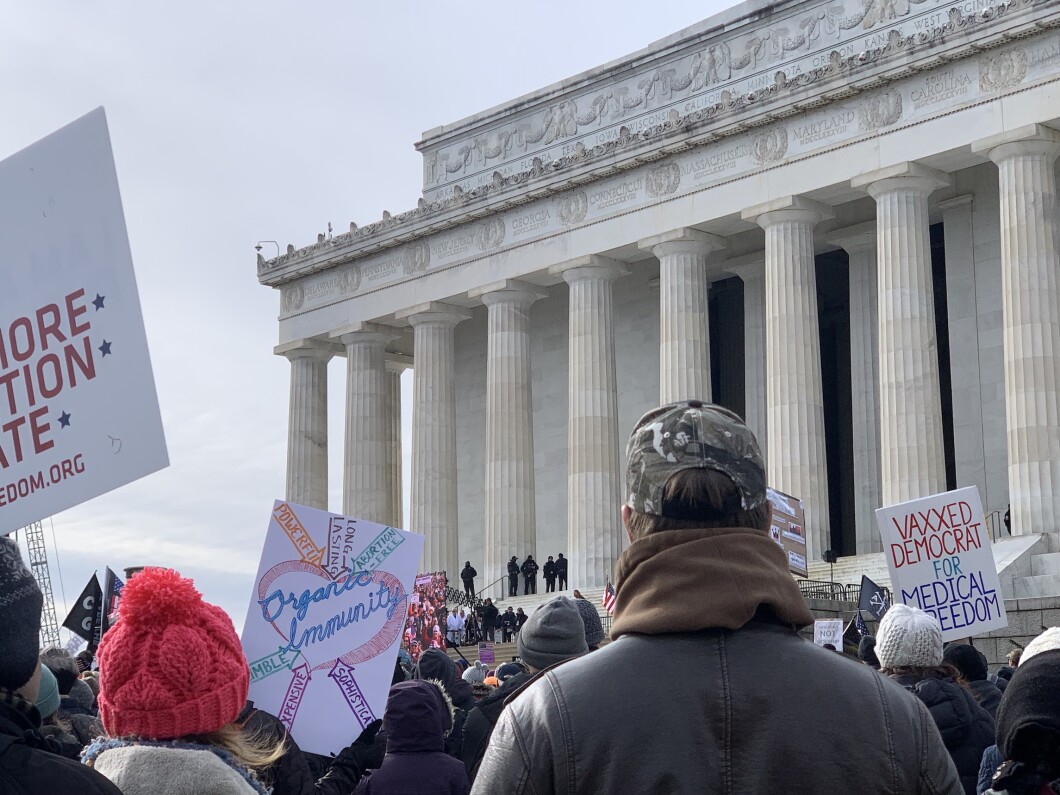 “Freedoms and mandates don't really go hand in hand. We’ve all seen the pandemic, we can all make the decision that’s safe enough for us,” said Stephanie, 36, from Crownsville, Maryland.


The crowd was rife with “Don’t tread on me” flags and creative signs decrying vaccine passports, mask mandates, and mandatory COVID-19 vaccines for school-age children. Hatred for Dr. Anthony Fauci, the government’s top infectious disease expert and adviser on the pandemic to President Joe Biden, was on full display.
Nick, 35, from West Virginia, held up a sign that in large, colored-in marker read, “Fire Fauci.”
“I'm not against vaccines. I'm just against mandating them. We have freedom of choice here in this country, or at least we should, at least that's what we believe, and I really think that should be upheld,” said Nick, who said he has been vaccinated.
On the back of his “Fire Fauci” sign was a long list of storied villains believed to be worse than Fauci — think Voldemort, Cruella de Vil, and Jafaar from Aladdin. 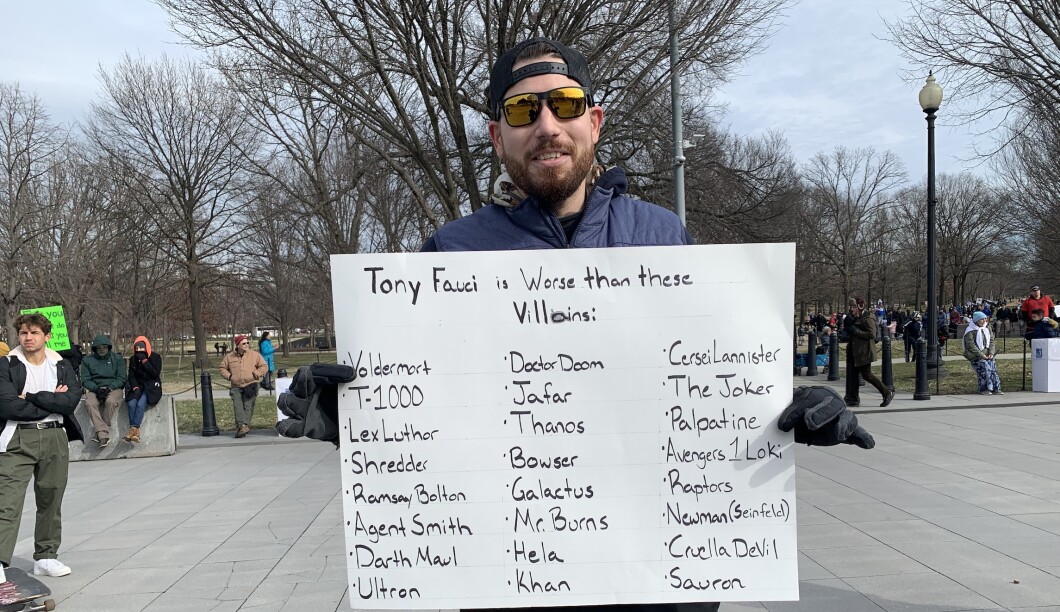 Stephanie and her husband, Jason, 38, drove to the rally Sunday morning with three of their five children in tow, a second grader, a fourth grader, and a sixth grader. In the early stage of the pandemic, their children went to school virtually. When she noticed her children were not learning at the speed they normally did when school was in person, Stephanie said, “I'm pretty sure I could do a better job,” and began to homeschool her children.
“I won’t send my kids to school masked,” she said.
Jason works for the city government, which requires employees to be vaccinated or submit to regular COVID-19 testing, an alternative that healthcare providers at government-funded health centers are not offered.
“The rules are set, and the way that things are is making it easier for people to get vaccinated, but people that don’t agree with it, they’re making a lot of things very difficult, and that just don’t make sense here in America,” Jason said.
Dr. Peter McCullough, a cardiologist who railed against medical censorship on the Joe Rogan Experience podcast last month, took the stage, which was propped up before the steps of the Lincoln Memorial.
“Not once did we hear an endorsement for our best and compassionate care to each and every American,” McCullough told the crowd. “In fact, we heard the opposite through a series of statements, a series of actions that was effectively a chill on early treatment.”
Biden's vaccine mandates have hit legal hurdle after legal hurdle since he announced them last fall. The mandates for private companies with 100 or more employees, as well as federal workers, have been blocked by the courts. The sole mandate that remains in place applies to healthcare workers whose employers receive funding from the Centers for Medicare and Medicaid Services. 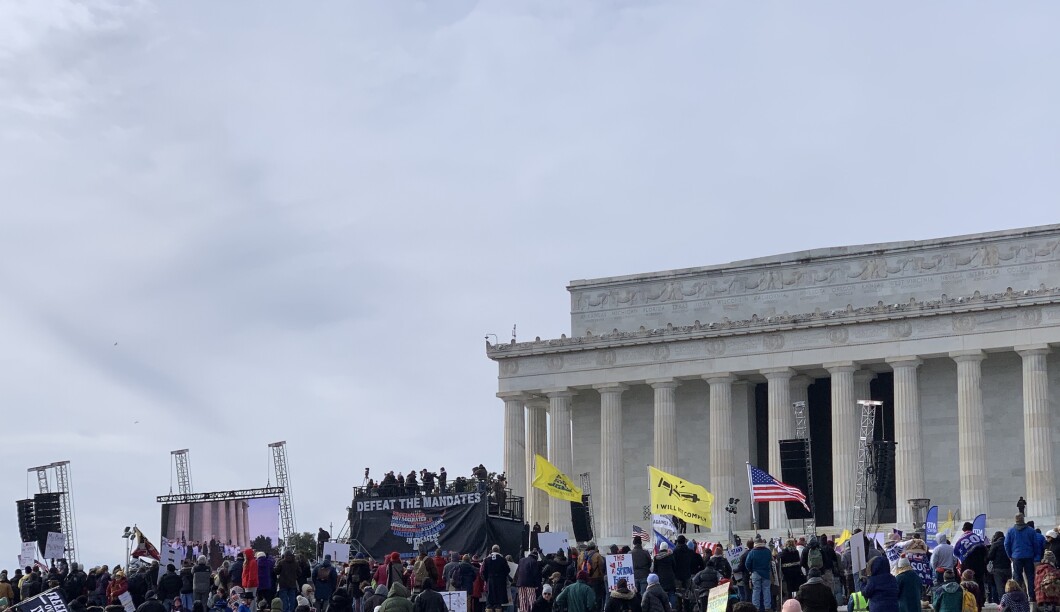 Once the Supreme Court struck down the vaccine-or-test mandate for employees of big businesses earlier this month, some employers began walking back vaccine requirements for their workers. Many employees feared a loss of crucial workers due to a vaccine mandate.
“I was mandated, and I refused, and the company renegotiated and said, 'That's okay, we’ll push that off,'” said Kent, a helicopter mechanic in his 50s from Charlotte, North Carolina. “We were going to [mandate regular testing], but with the Supreme Court decision, we don’t anymore.”
Despite concerns that a sweeping vaccine mandate would siphon off workers, major firms such as United Airlines will continue to uphold vaccine requirements for the foreseeable future. However, some have jettisoned the requirements following this month's court decisions ruling them unconstitutional. General Electric, for example, confirmed last week that it would suspend the requirement for employees.