3 Billion Birds Across Many Species Have Disappeared in North America

3 Billion Birds Across Many Species Have Disappeared in North America Sun Feb 13, 2022 2:29 am

3 Billion Birds Across Many Species Have Disappeared in North America

Bird abundance has declined by 30 percent since 1970
AddThis Sharing Buttons
Share to Facebook
Share to TwitterShare to Email
By Jason Daley | Sep 19 2019
Over the past 50 years, the conservation movement in North America has famously helped protect some of the most iconic birds from extinction, including bald eagles, wild turkeys, white pelicans, peregrine falcons, Kirtland’s warblers, and California condors. But a new study in the journal Science shows that while those rare birds were recovering, total bird numbers were plummeting, even among some of the most common backyard species.
The work is the first comprehensive attempt to reconstruct the abundance of birds in North America between 1970 and 2017. The team compiled data from academic studies and professional breeding bird surveys conducted by the USGS and Canadian Wildlife Service, along with citizen-science data collected from the Audubon’s annual Christmas Bird Count, the Manomet’s yearly shorebird survey, and other efforts. The team also looked at the last decade of data collected by the 143 NEXRAD weather radar stations located across the continent, which are able to track the entire biomass of bird migration each spring and fall.
The results of the study are shocking, even for the researchers. In total, bird populations have declined by 2.9 billion individuals, representing a 30 percent drop in total breeding bird numbers.
Lead author Ken Rosenberg, senior scientist at the Cornell Lab of Ornithology and American Bird Conservancy, says the magnitude of the loss and the number of species involved was unexpected. While ornithologists have noted broad trends showing that some species' populations have been on the increase and others have been in decline over the past few decades, no one had really dug into the data to see if the overall number of birds had changed.
“We were hit with this question of, OK, so if some are declining and some are increasing, are there really fewer birds today than there were in 1970?” Rosenberg says. “It’s a pretty big job just synthesizing all that information for over 500 species. We ran the numbers like a banking account sheet. I was pretty stunned by this 3 billion net loss of birds.” 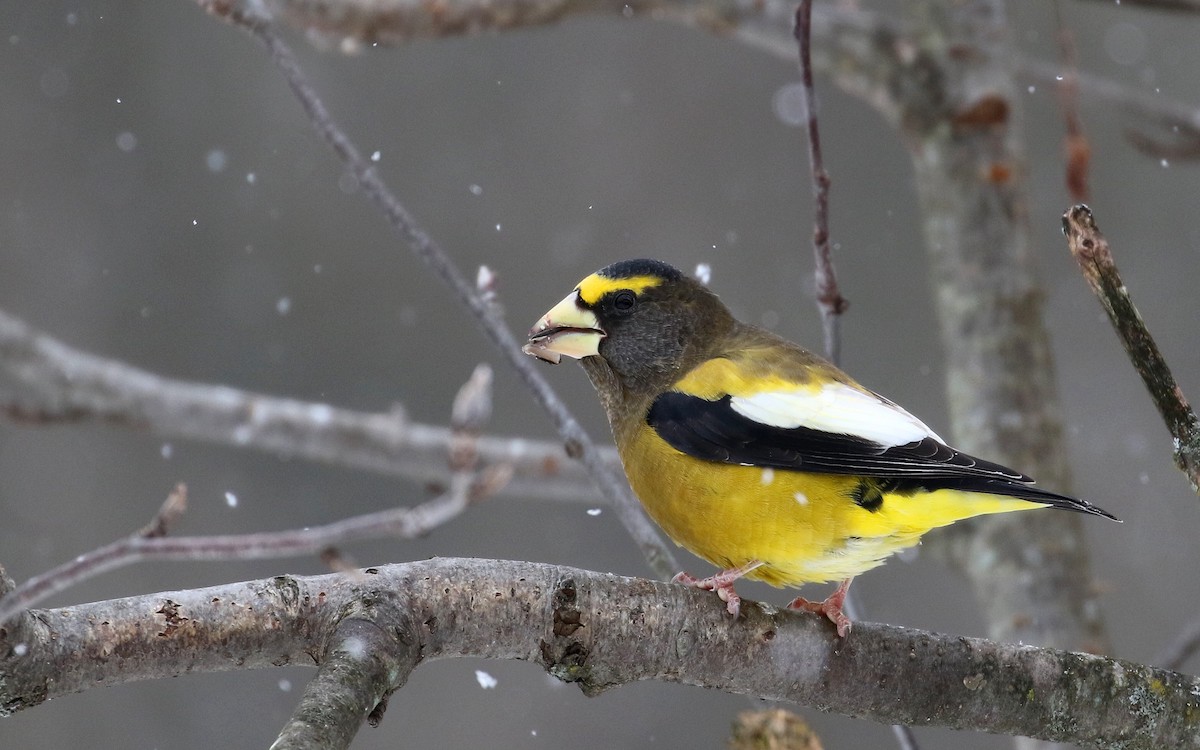 Evening Grosbeak | Photo courtesy of Matthew Pendleton, Macaulay Library at Cornell Lab of Ornithology
The researchers found broad population decreases, not just with rare or threatened birds. “We saw that these losses occurred in the common species and across every habitat,” Rosenberg says. “Even birds we were calling generalists that should be well-adapted to human environments were in decline. Starlings and house sparrows, these invasive species that we thought may be taking over, were showing the same declines. That overall result was, to me, a big surprise.”
The data shows certain categories of birds have been hit particularly hard. Grassland birds, for instance, lost 720 million individuals, or 53 percent of their total population during the study period; forest birds have dropped by 1 billion individuals, with 500 million of those coming from the boreal forest alone. Shorebirds, which had already suffered significant population drops before 1970, have lost 30 percent of their abundance since then. The radar data indicates that in just the past 10 years, the volume of birds migrating through the night sky each spring and summer has dropped by 14 percent.
Long-time feeder watchers have likely noticed the declines as well. Dark-eyed juncos, which are one of the most abundant birds across the United States in winter, have declined by 168 million individuals. Eastern and western meadowlarks, whose song used to be part of the backdrop of rural America, have dropped by 139 million, or 75 percent; the white-throated sparrow and its classic “Oh, Canada, Canada” call has plummeted by 93 million. Two out of every five Baltimore orioles are gone, and the same is true for barn swallows.
The loss of 3 billion birds over 50 years may not seem like a lot; billions of birds die annually from natural causes and human-generated threats. But Rosen says the losses are concerning because they come from the core population of adult, breeding-age birds. Each year, these nesting birds produce a clutch or several clutches of offspring, so many that by the end of the summer, overall bird numbers can increase five to 10 times. Before the next breeding season, however, more than half of those birds will perish. Over time, upticks in those mortality rates have eaten away at the core breeding population, decreasing it from roughly 10 billion birds to 7 billion across North America.
While the paper does not try to pinpoint the causes of the declines, previous studies have identified loss of habitat driven by agriculture, urbanization, and deforestation. Increased pesticide use and the massive reduction in insect numbers worldwide also likely play a major role. A study published last week, for instance, found that consumption of neonicotinoid insecticides caused weight loss and delayed migration in white-crowned sparrows, a phenomenon that may be more widespread in wild bird populations.
North America isn’t the only area seeing downward trends in bird populations. BirdLife International’s latest State of the World’s Birds report, published every five years, found that as of 2018, 40 percent of the world’s 11,000 bird species were in decline, with one in eight threatened with extinction. Most face threats similar to those of North American birds.
The study is grim news, but it does come with a positive conservation story: Those groups of birds that have received the most conservation attention are on the upswing. The once-imperiled raptors have increased by 78 percent, or 15 million individuals. Waterfowl have jumped by 56 percent, primarily because government funding and hunting groups spearheaded efforts to protect and restore millions of acres of wetland habitat.
That means there’s hope that bird numbers can recover if individuals take action and government and conservation organizations make the right investments. Rosen says the rebound of ducks and raptors shows that, given a little extra help and protected habitat, the birds can recover quickly.
“The story is not over,” coauthor Michael Parr, president of American Bird Conservancy said in a statement. “There are so many ways to help save birds. Some require policy decisions such as strengthening the Migratory Bird Treaty Act. We can also work to ban harmful pesticides and properly fund effective bird conservation programs. Each of us can make a difference with everyday actions that together can save the lives of millions of birds—actions like making windows safer for birds, keeping cats indoors, and protecting habitat.”
Rosen says bird lovers and conservationists should look to the model of waterfowl recovery. “The reason we have healthy and increasing waterfowl populations today is because recreational duck hunters were noticing declines back in the 1970s and they did something about it,” he says. “They raised their voices; they put their money where their mouth is, and policies were put in place and billions of dollars went into wetland protection, restoration, and waterfowl management.”
“What we’re really hoping is that this paper leads everybody who loves birds to start raising our voices and to take action,” Rosen says. “Then we can magnify those actions at the community and societal level and eventually become a political force for changing policies. It’s time for the rest of the people who love nature and love birds to become a voice.”

» 1.5 billion birds missing from North American skies, ‘alarming’ report finds
» DR.HENDERSON:" I Am the Owner of TRUST WITH 875 BILLION DOLAR FUND.Each and Every Individual of 7 Billion People Will Receive ONE BILLION DOLLAR"
» Bank of America Ordered to Pay $1.2 BILLION for Fraudulent Mortgages
» The Return Of Hemp, America’s ‘Billion-Dollar Crop’
» Mystery "SHOCKWAVE" Over North America 11/5/17