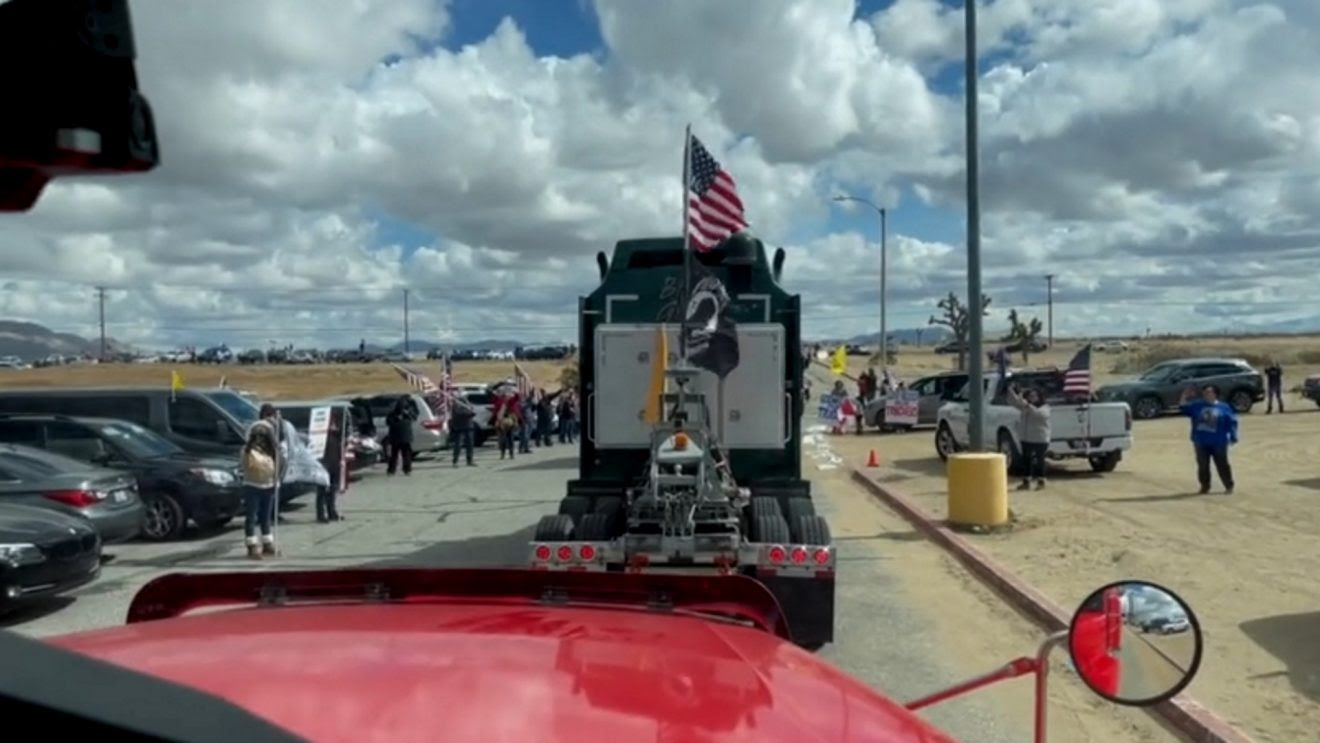 The People’s Convoy will head back to California on Mar. 31 to protest “10 objectionable COVID-19 bills” being debated in the CA state legislature. They are leaving just a few days short of a month-long stay at the Hagerstown Speedway in Maryland. Prior to its Mar. 4 arrival in Hagerstown, the Convoy embarked on a 10-day cross-country slow roll from Adelanto, CA, beginning Feb. 23. The Convoy plans to return to the D.C. area after the protest in Sacramento.
The follow-up convoy will first stop on Apr. 10 for a Defeat the Mandates Rally with the Convoy’s partner, The Unity Project, in the Los Angeles area. They will then head to Sacramento for their protest against the proposed COVID-19 bills. 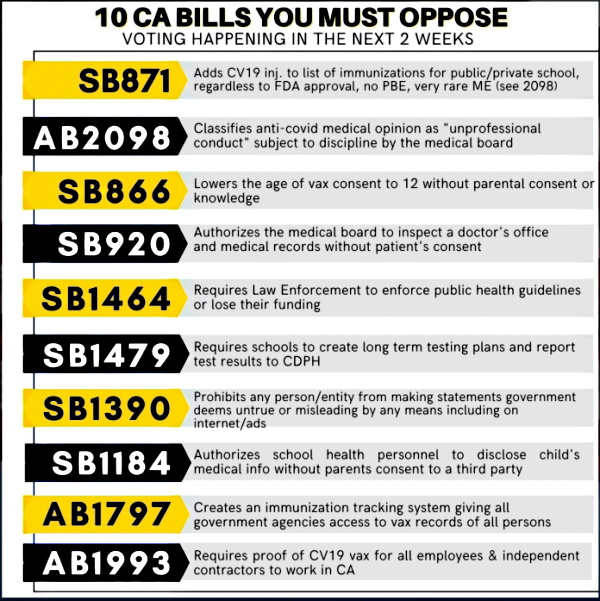 California Legislature COVID-19 Bills/The People’s Convoy/The Unity Project
The Unity Project
Contrary to some reporting, the Defeat the Mandates Rallies led by The Unity Project are not anti-vax rallies. Rather, the rallies are meant to reinforce the belief that “mandates are government overreach and that getting a vaccine should be a personal choice.”

The Unity Project/Statement of IntentionSpearheaded by several physicians and scientists, including well-respected, experienced physicians like Dr. Malone, Dr. McCullough, and Dr. Harvey Risch, the Unity Project has spoken forcefully against the vaccine mandates. Quoting Pfizer and Moderna, who state that the shots are “gene therapy” and are experimental, the participating doctors and scientists believe receiving the shots should be left to personal choice. They also think that handling the COVID-19 pandemic has subjected citizens worldwide to egregious measures that were completely unnecessary in many instances. Drs. Paul Alexander and Pierre Kory have often traveled with the Convoy and spoken at several of its rallies. Dr. Malone spoke at a Mar. 26 event in Hagerstown.

The Unity Project is now sponsoring a canvassing campaign powered by volunteers to educate Californians on the dangers of the COVID-19 bills that are currently on the floor. The website also features a series of videos to educate Californians about what is in the bills and why Californians should beware. The flier for the canvassing campaign is available in both English and Spanish. If passed, the bills will, among other things, add COVID-19 shots to the childhood immunization list for public and private schools and will classify “anti-COVID medical opinion as ‘unprofessional conduct.’” 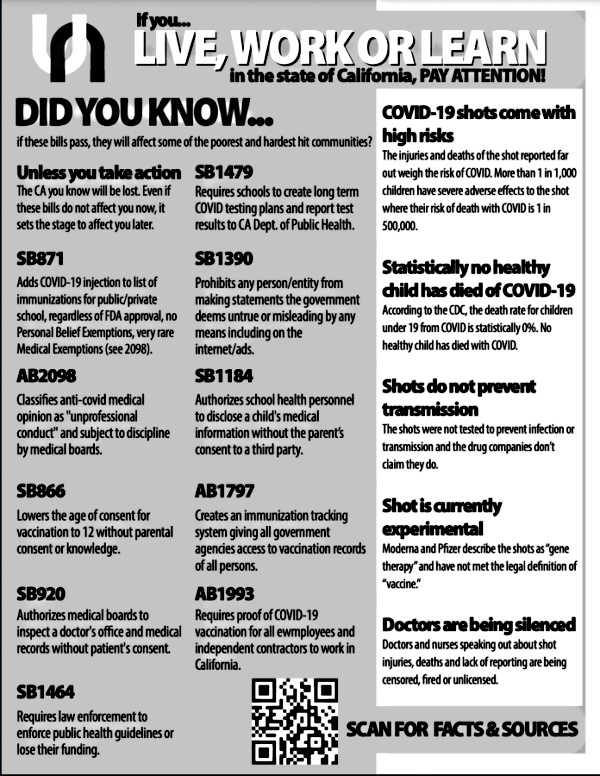 Flier/The Unity ProjectAs referenced in the flier, the shots do not prevent transmission of disease and the death rate for children under 19 from COVID “is statistically 0%.”
Information on The People’s Convoy website contends that passing the bills is not only dangerous but would “set the stage for other states to introduce similar laws.”
These universally dangerous bills are about to be voted on in the California legislature! If passed, these bills will change everything for people who want to Live, Work or Learn in the State of CA while exercising their right to medical freedom.
If passed, these bills set the stage for other states to introduce similar laws. We know that what starts in CA, spreads to other blue and purple states and potentially at a federal level. This affects everyone!
The Route
A Mar. 28 press release from the Convoy explains that the trip to California represents a continuation of their mission to end emergency orders and mandates—The People’s Convoy “is in this for the long haul,” said one of its organizers, Marcus Sommers.
The truckers’ website has posted a tentative route for the Convoy. Still, specific stops and rally points will be withheld until the day of travel, just as was the protocol for their earlier cross-country trip for the safety and security of its participants. The Convoy will begin its journey on I-81 heading south, picking up I-40 to head West and then to I-20 and I-10 into California. It will then travel I-5 up to Sacramento after a brief stop in the Los Angeles area. 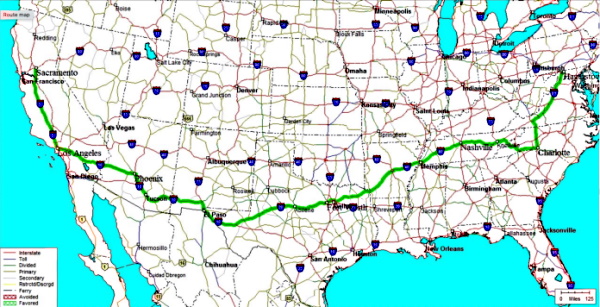 Map/Hagerstown to Sacramento/The People’s ConvoyPublicity for The People’s Convoy has been disappointingly scarce, and their rolls of the beltway have, at times, been met with significant resistance from authorities. However, the truckers and their allies have been undeterred. The Convoy rolled the beltway almost daily, and leadership members managed to secure meetings with Senators Ted Cruz (R-TX), Ron Johnson (R-WI), and other government officials. Senator Ted Cruz also made the trip to the Speedway on Mar. 10 to speak with the Convoy, and he then joined lead organizers Mike Landis and Brian Brase for a roll on the beltway before they delivered him to his press conference in D.C. later in the day. Several truckers were also able to make it into D.C. proper on several occasions, despite the blockades on exits to the Capitol and surrounding areas.
UncoverDC traveled with the Convoy on its initial trip. Conversations with several original truckers indicate that many in that group have had to leave to go back to work. Several truckers who have left the Convoy told UncoverDC that their “savings have been depleted,” and they have to make up for time lost; however, they will continue to work locally to ensure they are better represented in the future. Trucker Bonnie Kelly says she hopes that the convoy “will pick up steam again” along the way, just as it did with the original trip.
A compilation of videos and stills from the February/March trip shows consistent and massive support for the truckers’ mission on overpasses, highways, and cities—big and small—along the way.