The Vaccine Cult Wants to Rid the Earth of Anti-Vaxxers by Labeling Them Insane and Dangerous Thu Dec 01, 2022 11:25 am 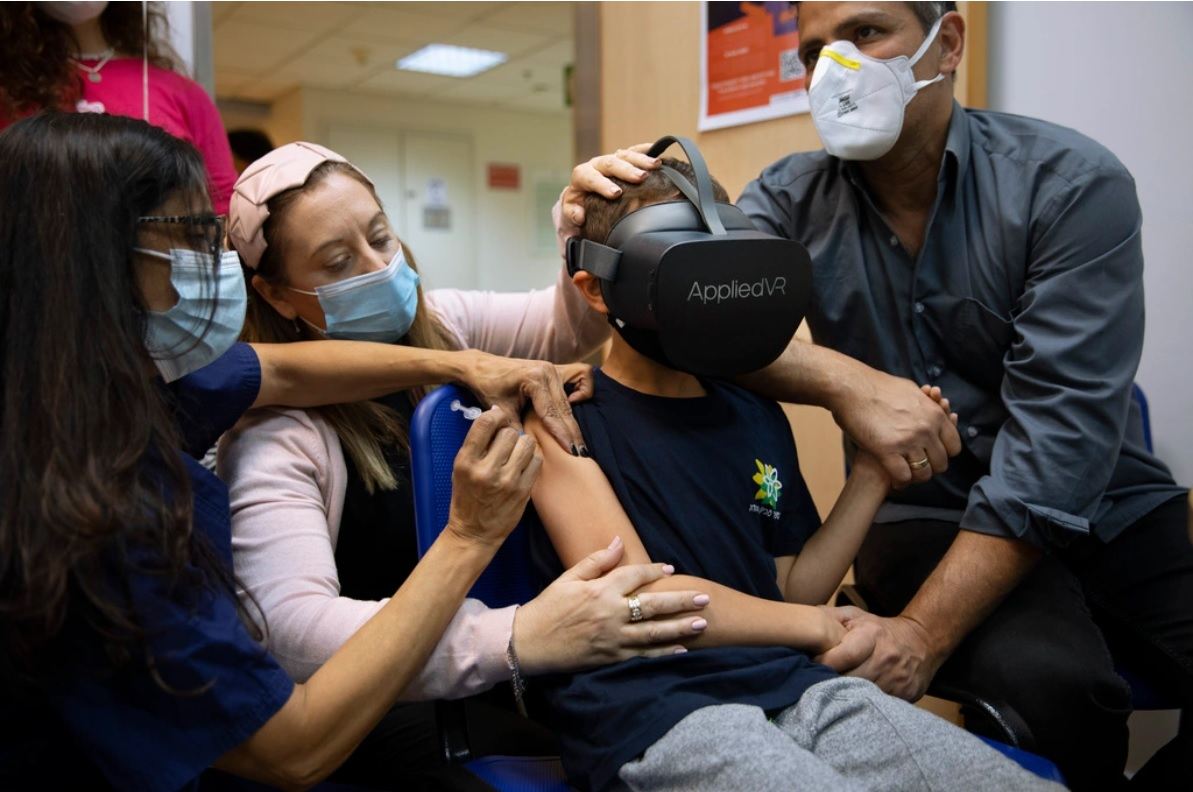 
The vaccine industry has several unique characteristics that no other industry has.
First, they are one of the only medical products that are not prescribed to treat a disease. They are medical products that are designed after the very profitable insurance industry, by selling a product based on fear of what might happen to you in the future. As such, they can be prescribed to EVERYONE, unlike other medical products that require sick people to sell a drug to for curing their illness.
But unlike the insurance industry which must pay out claims to their clients when the condition that is being insured against happens, the pharmaceutical industry pays NO CLAIMS if their product does not prevent the disease that the vaccine was promised to prevent, and the pharmaceutical vaccine industry is the only industry in the United States that cannot be held legally liable if their product harms or kills their customer.
Universal repeat vaccinations for everyone has always been the goal for the vaccine pushers. Their first attempt at repeat universal vaccine products was the annual flu shot, but when people stopped becoming afraid of the flu and vaccination rates dropped, they needed something that created more fear, and that something became COVID-19. See:


BOMBSHELL: Video Emerges Where Fauci and Others Planned for a “Universal mRNA Flu Vaccine” Which Became the “COVID-19 mRNA Vaccine” Because People were not Afraid Enough of the Flu Virus

Starting in China at the end of 2019, the great COVID-19 scam worked probably better than the Globalists had even anticipated, and most of the world’s population ran out to get the COVID vaccines about a year later. Then the vaccine was mandated in most places as a condition to continue with employment, to further increase distribution of the universal COVID vaccine.
Now there is one last hurdle for continuous, repeat universal vaccines like COVID-19, and that hurdle is the group known as “anti-vaxxers.”
The plans to silence anti-vaxxers is starting to take shape, and the main thrust of this plan is to label anti-vaxxers as having a mental disorder, and being a danger to society.
I will state right now before reporting on these efforts, that I think these plans will fail tremendously for one very simple reason: the pro-vaccine crowd is quickly diminishing because they are dying or becoming permanently disabled after receiving so many vaccines.
So the proportion of the population being vaccinated vs. unvaccinated is increasingly trending more towards the unvaccinated.
And while the pro-vaccine zealots want to label anti-vaxxers as mentally disabled, neurological diseases have exploded in those who have been vaccinated with COVID-19 vaccines based on statistics recorded in the government’s Vaccine Adverse Events Reporting System (VAERS.) See:


A Brain-Damaged Nation: Neurological Diseases Explode in 2021 After COVID-19 Vaccines – 100,000%+ Increase in Strokes

These numerous brain injuries might help those of us still functioning with non-vaccine injured brains understand how such a study as the one just published in the journal BioMedicine that claims to “demonstrate that misinformation perpetuated by the anti-vaccination movement may be causing more deaths and side effects from any vaccine,” could ever be accepted for publication in a so-called “scientific” journal.

In the era of Covid 19 and mass vaccination programs, the anti-vaccination movement across the world is currently at an all-time high. Much of this anti-vaccination sentiment could be attributed to the alleged side effects that are perpetuated across social media from anti-vaccination groups.
Fear mongering and misinformation being peddled by people with no scientific training to terrorise people into staying unvaccinated is not just causing people to remain susceptible to viral outbreaks, but could also be causing more side effects seen in the vaccination process. This brief review will offer data that may demonstrate that misinformation perpetuated by the anti-vaccination movement may be causing more deaths and side effects from any vaccine.
A mini review of published literature has been conducted and found that mental stress clearly causes vasoconstriction and arterial constriction of the blood vessels. Therefore, if subjects are panicked, concerned, stressed or scared of the vaccination, their arteries will constrict and become smaller in and around the time of receiving the vaccine. This biological mechanism (the constriction of veins, arteries and vessels under mental stress) is the most likely cause for where there has been blood clots, strokes, heart attacks, dizziness, fainting, blurred vision, loss of smell and taste that may have been experienced shortly after vaccine administration. The extreme mental stress of the patient could most likely be attributed to the fear mongering and scare tactics used by various anti-vaccination groups. (Full study.)

How convenient. Now a member of the vaccine cult can experience deadly side effects from a vaccine and blame it on the “misinformation” put out by anti-vaxxers, rather than the vaccine itself.
Those anti-vaxxers are insane! Stop the madness!
That may sound like sarcasm and joking, but it is no joke. This is how the vaccine cult wants to label anti-vaxxers. Such a label can then be used to coerce “insane” people to be vaccinated by force if a medical doctor dictates so.
And we thought such forced medical procedures were banned during the Nuremberg trials after WW II….
The Vigilant Fox recently reported:

The College of Physicians and Surgeons of Ontario is doubling down on the COVID injection.
In fact, they are such strong advocates of it — that they are advising physicians to use psychotropic means on those with vaccine “anxiety.” Here’s a memo they sent out to Ontario physicians: 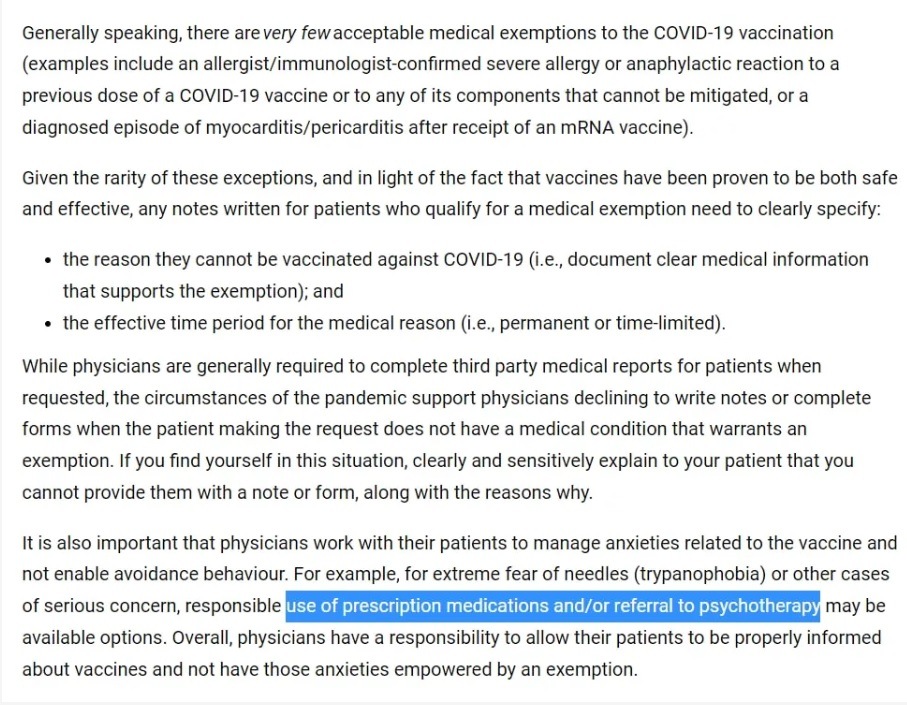 Let’s focus on that last sentence, “responsible use of prescription medications and/or referral to psychotherapy may be available options.” They actually said it a bit more bluntly before the revision:

“In cases of serious concern, responsible use of prescription medications and/or referral to psychotherapy ARE available options.”
That sounds more in line with “you SHOULD” rather than “you COULD.”
Popular podcaster Laura-Lynn Tyler Thompson interviewed Canadian doctor William Makis on the matter. Here’s what he had to say about it:
So this has come out recently out of the College of Physicians and Surgeons of Ontario. The college sent out a letter or a memo to all the doctors in Ontario suggesting to them now — so far, they’re not mandating it. They’re just suggesting it. That any of their unvaccinated patients — that they should consider that they have a mental problem and that they should be put on psychiatric medication. So far, it’s just a suggestion, but the College of Physicians and Surgeons of Ontario should not be making these kinds of suggestions.
This is extremely unethical, and this is a very, very slippery slope. If they’re suggesting that people who wish to have bodily autonomy and don’t want an experimental vaccine — that there may be something mentally wrong with them, that is a very, very dangerous, slippery slope that we’re on.

Read the full article here.
And we have one example where this has already happened with a Swiss medical doctor who was allegedly locked away in a mental asylum for questioning his government’s COVID edicts.

Dr. Thomas Binder is a Swiss cardiologist with over 34 years of experience in treating respiratory infections. He received a doctorate in immunology and virology, specializing in internal medicine and cardiology, from the University of Zurich. Binder is an intelligent man who was deemed insane by the Swiss government for speaking out against COVID regulations.
Dr. Binder has been an outspoken critic of COVID restrictions since the beginning of the pandemic. On April 9, 2020, the cardiologist criticized the government’s response to COVID and provided his own analysis of the virus. He posted his thoughts on his private website, and the post received over 20,000 views.
Three days later, a day before Easter, 60 armed police officers and 20 members of the Kantonspolizei Aargau’s anti-terrorism unit forcibly removed Dr. Binder from his home. Authorities searched through the doctor’s online activity and could not find anything to use against him. However, an emergency room doctor who was working with the authorities arrived and diagnosed Dr. Binder with “corona insanity.” He was locked away in a mental asylum for questioning the COVID narrative. (Source.)

As I said above, I don’t see these tactics being very successful with most anti-vaxxers. We will fight back.
But my concern is for the children. Today it is legal in all 50 states to have a doctor declare that a parent is mentally incompetent and guilty of “medical neglect” for simply refusing to obey a doctor’s advice for your child, and then the state can come in and medically kidnap your child and put them into foster care where they can then legally give them any vaccine or drug they want.
That is the real danger to these labels they want to put on anti-vaxxers, and there isn’t a single governor in any of the 50 states who is stepping forward to protect the children in their state from medical kidnapping, or from being harmed by experimental COVID shots by foolish parents.
Related: 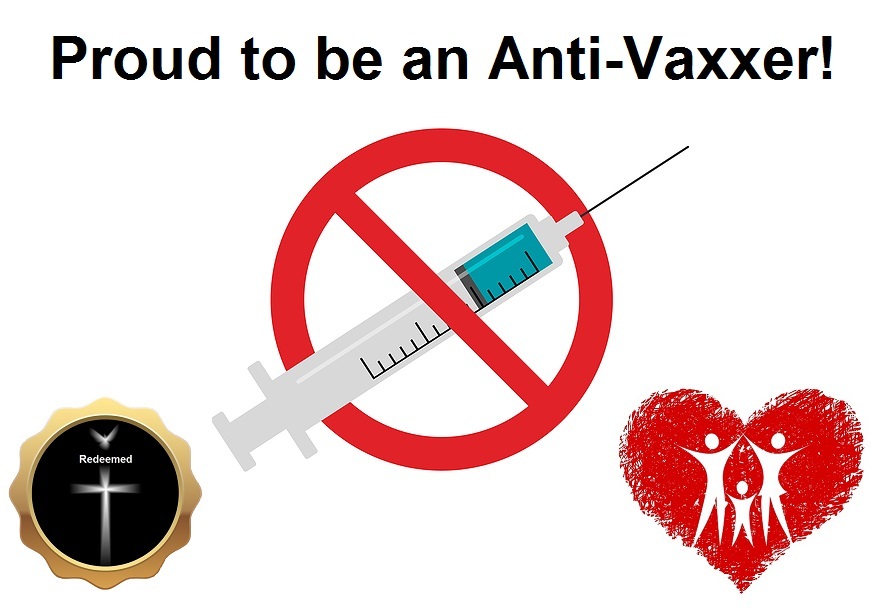