It is a sad day in America as new evidence has come forth showing that everything we were told about the Sandy Hook Elementary School shooting
was a lie and that, possibly factions, within our own government and
mainstream media were complicit in staging the atrocity to possibly
strip constitutional rights from American citizens by banning firearms.

Tuesday I was reviewing information sent in by reader tips on the Sandy Hook (Newtown, CT) school shooting.

As I was cross-referencing other reports
that we have done, an extremely dark, cold feeling ran down my spine —
to me it was confirmed. My original suspicions came all flooding into my
mind as more pieces of the puzzle fell into place.

First of all I would like to preface
this article by stating that I personally feel that this Newtown, CT
shooting case and some details within is one of the hairiest stories if
not the most dangerous story we have covered in depth aside from the BP Oil Spill of 2010.

In fact, most of the media and even alternative
media are not covering certain aspects of this case which deserve to be
highlighted. In my opinion the information about the possible shooters
being disguised as nuns is groundbreaking. Please take the time to read
this entire essay. 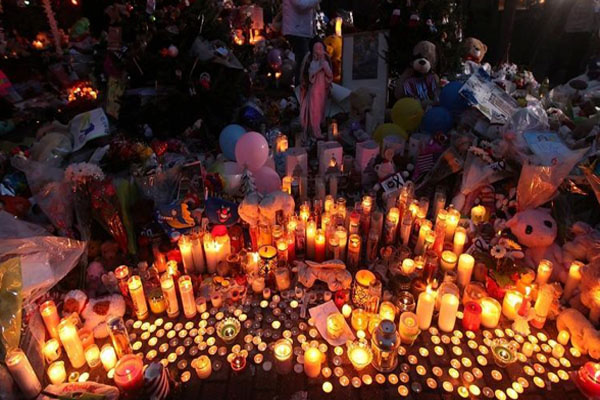 Here is a recap of Ambellas’ report;

Newtown Police: ‘Two Occupants with Ski Masks, One May be Wearing a Nun Outfit’

Note: On December 14, 2012, Shepard Ambellas reported the following;
A caller on the Alex Jones
show Friday (the day of the shooting) gave a report from Newtown that he
was in a bowling alley before 10 AM (before the shootings took place)
signifying that the school population was possibly held artificially low
Friday as a possible militarized operation took place.

The caller has also stated that an unverified rumor is circulating amongst the school staff that the shooters were described to be disguised ”organized group of nuns”infiltrated the school property to carry out the shootings leaving at least 26 dead at an elementary school Friday.

Now evidence has come forth that correlates with school staff
claims that the shooters were “disguised group of nuns” in a shocking
audio capture of Newtown Police operations on the morning of the
shooting.

NEWTOWN, CONECTICUT — It has now been verified in an audio clip reviewed bytheintelhub.com that,
at the very least, police officers on the day of the shooting believed
that there were multiple suspects fleeing the scene in a purple van
wearing ski masks and, possibly, nun outfits.

UPDATE: January 9, 2013 — The following police audio (YouTube) has been pulled along with a plethora of other videos
(in the last 24 hours) which show in a massive coordinated effort to
fool the American people as the Sandy Hook shootings were likely staged.

Take a listen for yourself.

At 1:35:07 into the video, “One may be wearing a nun outfit, headed toward Danbury and Stoney Hill, purple van”.

What bothers me most about the fact that the (above) police scanner audio was taken down is the fact that it coincides with several other key, videos,
audio, tweets, Facebook posts, and more that have been mysteriously
taken down in the last 24 hours. I heard this audio for myself as did
many others. The transcript is available above.

After further investigation I have noticed key details of the crime
emerge that are just uncanny to say the least. In fact, I don’t even
know what to make of it as my brain has been on information overload
with all of the other stuff I am busy with right now.

However, this issue is too important to fly under the radar. Bottom
line, we need a massive independent investigation into the entire
shooting.

On the very day of the shooting, the Chicago Tribune posted the following headline reading simply, “Elementary School Shooting”.

What kind of headline is this? What could this article be about? It
sounds more like an optimized search engine term rather than an article
headline on a popular mainstream newspapers website. But even more creepy was what the body of the article read and the photo it contained.

Two unidentified nuns leave the scene of the aftermath at Sandy Hook Elementary School in Newtown, Connecticut. At least 27 people, including 18 children, were killed.

It literally reads “Two unidentified nuns leave the scene…”.
However what stands out to me the most is the fact that the nuns look
very official. In fact they look so official they even have blatant identification badges.

To me this signifies a totally staged photo op also posted in conjunction on a major news website
to play as a cover if the (militarized) shooters were to be made or
identified by authorities or eyewitnesses as the teachers described and
as police audio details.

However we are merely scratching the surface of a massive governmental plot to obtain our firearms.

New evidence has surfaced showing that video “memorials” of the Sandy
Hook school shooting victims were posted on several CIA ghost accounts
over 30 days in advance.

In one case a video was uploaded to private and then the day of the
shootings it was released publicly. However, there was just one flaw,
the time date stamp was recorded by Vimeo’s system, a Tweet was recorded
by Twitter, and a post was found on Facebook all pointing to prior
posting of memorials of the Sandy Hook victims.

In fact, some of the CIA contrived footage is so pathetic that it was
used by the mainstream media early on indicating full involvement of
several factions on many levels.

Yesterday in front of my eyes I witnessed link after link, video after video, being pulled from multiple sites across the web.

The following Twitter user @bacmaster may be involved in some type of operation as he actually Tweeted the video post he did one month or more prior to the school shooting.

However after I confronted him through my Twitter @NotForSale2NWO
yesterday he panicked and deleted the original Tweet itself, which
implicated him as an operative with advanced knowledge of the shooting.

The following Vimeo account Joseph Ametrano shows the upload time date stamp as November 10 2012 at 11:36 am;

The bottom line is there are multiple time date stamps that precede the actual shooting event. This demands an explanation.

Please send all information and tips to tips@theintelhub.com as we will be conducting an open investigation into this matter.

As the YouTuber points out the only thing that matters now is finding
out if there was indeed real victims or if the entire shooting scene
was in fact staged.

There are others including a Florida professor who are taking a serious look into this event. Claudine Zap writes;

A media professor at Florida Atlantic University who is questioning the Sandy Hook massacre has caused controversy with his conspiracy claims.

James Tracy, who writes a personal blog about conspiracy theories, believes the events that unfolded at Sandy Hook did not happen as reported.

The professor writes on his blog, Memory Hole,
“While it sounds like an outrageous claim, one is left to inquire
whether the Sandy Hook shooting ever took place—at least in the way law
enforcement authorities and the nation’s news media have described.” He
suggests that there were multiple shooters and that the number of dead
is incorrect. The blog post was published on the Global Research site, where it caught the attention of the Web.

The academic, who is known for his conspiracy theories on 9/11 and the Oklahoma bombing, believes—as he claims on his blog and recently stated on a radio show—that trained “crisis actors” may have been employed by the Obama administration to shape public opinion on gun control.

The 47-year-old, who holds a Ph.D. from the University of Iowa in mass communication,
wrote on his blog, “ As documents relating to the Sandy Hook shooting
continue to be assessed and interpreted by independent researchers there
is a growing awareness that the media coverage of the massacre of 26
children and adults was intended primarily for public consumption to
further larger political ends.”

According to his faculty profile, the professor “teaches courses examining the relationship between commercial and alternative news media and socio-political issues and events.” He also lists
his recent work in “Censored 2013: Sourcebook for the Media Revolution.
The Top Censored Stories and Media Analysis of 2011-2012.”

Shepard Ambellas is the founder & director of theintelhub.com