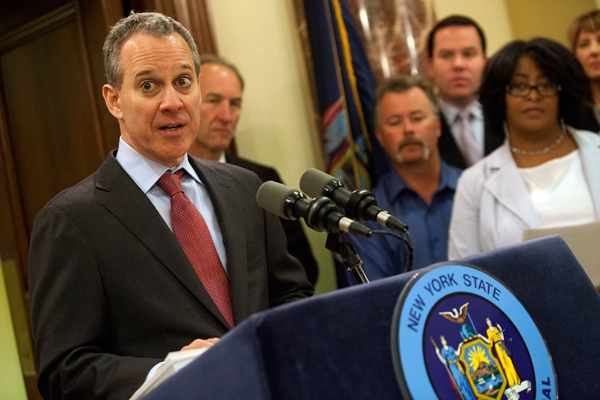 New York Attorney General Eric Schneiderman
Brendan Bannon/Bloomberg via Getty Images
Hilarious corruption story hit the news wires this week. It’s actually a two-part joke.
Part one is that Thomson Reuters got slapped in the face by New York State Attorney General Eric Schneiderman for its absurd practice of selling early access to the results of the consumer confidence survey it conducts each month in conjunction with the University of Michigan.
It turns out that in recent times, if you paid them an extra subscription fee of a few thousand dollars a month, Thomson Reuters would allow you access to the Consumer Confidence data a full two seconds earlier than the rest of its subscribers – at 9:54:58 a.m., as opposed to 9:55:00 exactly.
Thomson Reuters suspended the activity at the request of Schneiderman, who released a statement about this humorously brazen effort at the systematic sale of inside information. From the L.A. Times:
The consumer confidence data can move financial markets, and Scheiderman’s office said “that two-second advantage is more than enough time for these traders to take unfair advantage of their early access to this information as they execute enormous volumes of trades in the blink of an eye.”
“The securities markets should be a level playing field for all investors and the early release of market-moving survey data undermines fair play in the markets,” Schneiderman said Monday.
The two-second head start allows high-speed traders to plunge into the markets en masse and retreat all the way back again before most of the world sees this market-altering economic data. From a CNN report a few weeks ago:
In the milliseconds before the survey is released to other paying clients at 9:55 a.m. ET, trading volumes can soar up to 20 times their normal levels. By 9:54:59 a.m. ET, long after computers have acted on the number, volumes have already returned to normal.
As my friend Eric Salzman joked, the two-second head start is a scheme taken straight out of The Sting, where the “hook” was early access to the results of an out-of-state horse race. All that’s missing is Robert Shaw placing his bet: “Five hundred thousand dollars to win. Lucky Dan!”

There’s a reason why high-frequency trading is such a lucrative business. With the tiniest head start on market-moving data, computerized traders can make giant piles of money. And as others have reported, the Thomson Reuters consumer confidence survey isn’t the only economic data mine to which traders can buy early access.
Deutsche Borse sells access to its Chicago Business Barometer three minutes early to anyone willing the relatively modest sum of 2,000 Euros a year.
Meanwhile, the Institute for Supply Management teamed up with Thomson Reuters to also sell a kind of enhanced access to the results to a monthly survey of purchasing managers (which measures both manufacturing and non-manufacturing industries). The ISM releases the data to everyone at 10:00 a.m. once a month, but those who pay extra get the data in a form that’s a few ticks easier for computer trading algorithms to read and digest.
It’s bad enough that this goes on out in the open, but part two of this joke is that nobody’s ashamed of it in the slightest. In fact, Thomson Reuters threw the P.R.-office version of a hissy fit today after Schneiderman closed shop on their neat little revenue stream. The firm refused to permanently end the practice and defiantly insisted upon their right to sell data to whomever they want, whenever they want. From a news release:
Thomson Reuters strongly believes that news and information companies can legally distribute non-governmental data and exclusive news through services provided to fee-paying subscribers . . .
It is widely understood that news and information companies compete for exclusive news and differentiated content to help their customers make better informed trading and investment decisions . . .
Mm-hmm. Yes, there’s a socially beneficial activity, helping your customers make “better informed trading and investment decisions” two seconds faster than your other customers (read: suckers). Clearly, someone who wants to buy a two-second head start is doing so because he or she needs those extra two seconds to soberly digest market data, not because he or she wants to massively front-run the rest of the investing public using high-speed computers.
It’s amazing how endless these market-scamming stories are. Practically every other day lately, there’s news either of a depraved price-fixing scandal (ridiculously, even Hershey’s paid a fine a few weeks back for rigging chocolate prices in Canada) or some crude signal-stealing scheme like this thing. What’s next, selling card-counting machines for casino-goers?
www.rollingstone.com / link to original article

» Matt Taibbi – Everything is Rigged, Vol. 9,713: This Time, It’s Currencies – 14 June 2013
» BREAKING: Massive Fire Reported In The Basement At The JP Morgan Gold Warehouse On Wall Street, 20 Firetrucks Showed Up! – 21 July 2013
» RollingStone – Matt Taibbi – Why Didn’t The SEC Catch Madoff? It Might Have Been Policy Not To – 1 June 2013
» Occupy Movement Files Lawsuit Against Every Federal Regulator Of Wall Street – 2 March 2013
» WikiLeaks Was Just a Preview – by Matt Taibbi, Rolling Stone