OUT OF MIND » PERCEPTUAL AWARENESS » THE SHIFT IN CONSCIOUSNESS » Buddhist Legend Flower Said to Bloom Once in 3.000 Years Spotted Across Globe

Buddhist Legend Flower Said to Bloom Once in 3.000 Years Spotted Across Globe 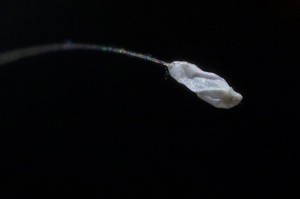 Udumbara flower. (Edward Dai/Epoch Times)
Thanks to Suzy Star.
By Tara MacIsaac and Yang Xiaohui, Epoch Times – June 12, 2014
The universe is full of mysteries that challenge our current knowledge. In “Beyond Science” Epoch Times collects stories about these strange phenomena to stimulate the imagination and open up previously undreamed of possibilities. Are they true? You decide.
The udumbara flower is said in Buddhist legend to bloom only once every 3,000 years, the last time being before the birth of Buddha.
Spotted again across the world in the past 20 years or so, some say the udumbara could herald the coming of a great sage or enlightened being.
This very tiny, fragrant flower rests atop a thin stem and is surprisingly resilient. People who’ve found the udumbara in recent years have reported keeping it for long periods of time without it decaying or withering, and even watching it spring back after being crushed.
. 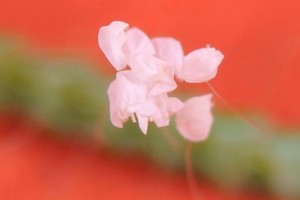 .
Udumbara flowers on a pine needle photographed under a microscope by Mr. Li of Malacca, Malaysia.
. 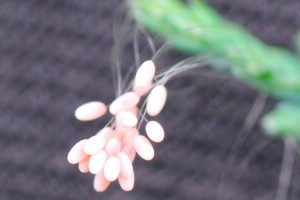 .
Green lacewing eggs under a microscope. (Mr. Li)
.
It was first sighted on a Buddha statue in a South Korean temple in 1997. In 2010, Chinese state-run media surprisingly reported on sightings of the flower, calling it celestial. This is surprising, because the regime is officially atheist and would not usually suggest a great spiritual ruler could arrive on Earth. All articles on state-run media were removed shortly after they were published, but not before they spread across Chinese Internet networks.
. 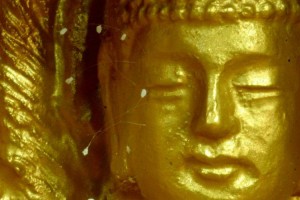 The alleged udumbara flowers have been seen blossoming on Buddha statues. (Epoch Times)
.
The regime has since stated that the udumbara is an insect egg, the egg of a green lacewing. Though the lacewing eggs and the udumbara are similar in appearance, the eggs have been seen to wither and die shortly after hatching whereas the flowers are fragrant and long-lasting.
Udumbara is a word from the ancient Indian language, Sanskrit, meaning “an auspicious flower from heaven.”
According to Buddhist legend, its appearance heralds the arrival of the Holy King Who Turns the Wheel, rectifying the Dharma in the world. This King is said to accept anyone of any religious affiliation, offering salvation to all through compassion.
Volume 8 of the Buddhist scripture “Huilin Phonetics and Interpretation” states: “The udumbara flower is the product of propitious and supernatural phenomena; it is a celestial flower and does not exist in the mundane world. If a Tathagata or the King of the Golden Wheel appears in the human world, this flower will appear due to his great virtue and blessings.”
A video posted in 2007:

OUT OF MIND » PERCEPTUAL AWARENESS » THE SHIFT IN CONSCIOUSNESS » Buddhist Legend Flower Said to Bloom Once in 3.000 Years Spotted Across Globe