Well, it is a fact that May Day, which the children do enjoy with all vibes, is not an overly prominent holiday in America. Yet, it does have a long and notable history as one of the world's principal festivals. The origin of the May Day as a day for celebration dates back to the days, even before the birth of Christ. And like many ancient festivals it too has a Pagan connection.
For the Druids of the British Isles, May 1 was the second most important holiday of the year. Because, it was when the festival of Beltane held. It was thought that the day divides the year into half. The other half was to be ended with the Samhain on November 1. Those days the May Day custom was the setting of new fire. It was one of those ancient New Year rites performed throughout the world. And the fire itself was thought to lend life to the burgeoning springtime sun. Cattle were driven through the fire to purify them. Men, with their sweethearts, passed through the smoke for seeing good luck.
Then the Romans came to occupy the British Isles. The beginning of May was a very popular feast time for the Romans. It was devoted primarily to the worship of Flora, the goddess of flowers. It was in her honor a five day celebration, called the Floralia, was held. The five day festival would start from April 28 and end on May 2. The Romans brought in the rituals of the Floralia festival in the British Isles. And gradually the rituals of the Floralia were added to those of the Beltane. And many of today's customs on the May Day bear a stark similarity with those combined traditions.
May day observance was discouraged during the Puritans. Though, it was relived when the Puritans lost power in England, it didn't have the same robust force. Gradually, it came to be regarded more as a day of joy and merriment for the kids, rather than a day of observing the ancient fertility rights.
The tradition of Maypole and greeneries:
By the Middle Ages every English village had its Maypole. The bringing in of the Maypole from the woods was a great occasion and was accompanied by much rejoicing and merrymaking. The Maypoles were of all sizes. And one village would vie with another to show who could produce the tallest Maypole. Maypoles were usually set up for the day in small towns, but in London and the larger towns they were erected permanently.
The Maypole tradition suffered a setback for about a couple of decades since the Puritan Long Parliament stopped it in 1644. However, with the return of the Stuarts, the Maypole reappeared and the festivities of May Day were again enjoyed. One of the great Maypoles, was
The changes brought about by the Reformation included attempts to do away with practices that were obviously of pagan origin. But the Maypole, or, May tree, was not issued in practice at the behest of the second Stuart.
Although they succeeded in doing this, Maypole with most of the other traditions, many still survived. And Maypole is one of them. In France it merely changed its name. In Perigord and elsewhere, the May Tree became the "Tree of Liberty" and was the symbol of the French Revolution. Despite the new nomenclature, the peasants treated the tree in the same traditional spirit. And they would dance around it the same way as their forefathers had always done.
Maypoles and trees:
Trees have been linked to a part of celebration, perhaps, to the days ancient New Year rites. The association of trees to this celebration has come riding on the back of the spring festival in ancient Europe. Trees have always been the symbol of the great vitality and fertility of nature and were often used at the spring festivals of antiquity. The anthropologist E. O. James finds a strong relationship between the ancient tree related traditions of the British and the Romans. According to James' description, as a part of the May Day celebration, the youths in old Europe cut down a tree, lopped off the branches leaving a few at the top. They then wrapped it round with violets like the figure of the Attis, the ancient Roman god. At sunrise, they used to take it back to their villages by blowing horns and flutes. In a similar manner, the sacred pine tree representing the god Attis was carried in procession to the temple of Cybele on Rome's Palatine Hill during the Spring Festival of March 22.
Roots of May Day celebration in America:
The Puritans frowned on May Day, so the day has never been celebrated with as much enthusiasm in the United States as in Great Britain. But the tradition of celebrating May Day by dancing and singing around a maypole, tied with colorful streamers or ribbons, survived as a part of the English tradition. The kids celebrating the day by moving back and forth around the pole with the the streamers, choosing of May queen, and hanging of May baskets on the doorknobs of folks -- are all the leftovers of the old European traditions.

May Day History Beltane and the May Pole
Added by Matthew Warburton on April 30, 2014.
Saved under Religion, UK, World
Tags: May Day
image: http://guardianlv.com/wp-content/uploads/2014/04/May-Day-History-Beltane-and-the-May-Pole-650x433.jpg 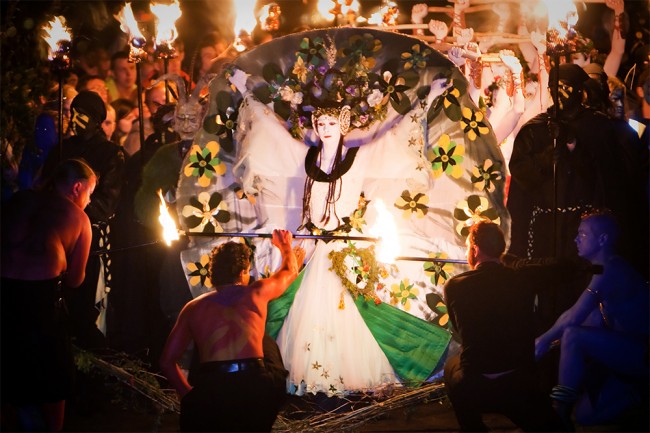 May Day is a holiday that slips many people by, yet for some it is full of meaning. The history of May Day and the May Pole tradition is thousands of years old, and is rooted in the Celtic cultures of the Northern Hemisphere. May Day was, and still is, known as Beltane; a festival for the celebration of the life, fertility and summer.
May 1 was once considered the start of summer, and the other season, winter, started on November 1. Many pre-Christian Celtic people split the seasons into two in this way, and Beltane marked a half way point in the year. It was celebrated with much optimism; the sun thawed out the people and the land, and flowers and animals sprang to life in the new-found warmth. The strength of the sun is said to finally overcome the darkness of the winter on May Day, and takes it’s place to bring life to the planet.
For Pagans of ancient and modern times, the winter is a time to honor death, and the summer a time to honor life. Beltane, being the half way point between death and life, dark and light, is a sacred day of “no time” where the veils between the physical and ethereal worlds are at their thinnest. The fairies are said to be out in all their mischief on the eve of Beltane, and so traditions often involved offerings, such as leaving flowers or food out for them.
Beltane is the cross-over, and represents a coming change in the human cycle, which reflects the turning of the seasons. Winter is a time that can feel dreary, and it can start to take it’s toil on the soul. Short days, grey skies, and cold temperatures begin to wear people down, and in ancient times this would be coupled by a gradual decline in food supplies. Winter, back then, would be a very difficult time indeed. The coming of summer, and the festival of Beltane, were times of great hope; crops and grasslands became full of life again, animals bred, and the warmth of the sun thawed out human soul.
As life becomes the pre-dominant force, ancient civilizations would celebrate Beltane with highly energetic fire displays, field frolicking, and of course dancing round the May pole. The word Beltane translates to bright fire, and the reason for the bonfires may be in celebration of the sun; the Bel fire was lit in order to invoke Bel, the Sun God. Myths surrounding Beltane very often describe a battle between two deities, or a battle between summer and winter, and on May 1 summer prevails.
Pagan celebrations old and new still celebrate Beltane with feasts, festivities, fires, and yet more frolicking. Across the world some of the ancient traditions of Beltane still exist, often in evolved or nullified forms. In Britain for example, Beltane traditions are still quite strong on May Day and include the crowning of the May queen, carnivals, Morris dancing, where many men dressed in bells perform tribal dance, and the dancing of the May pole. The ancient history is still visible across much of Europe.
image: http://guardianlv.com/wp-content/uploads/2014/04/May-Day-May-Pole2-650x487.jpg

The May pole is actually, historically speaking, a phallic symbol, and the dancing around it an ancient fertility rite. The May pole is perhaps the most famous tradition associated with modern May Day, and it had equal importance for Celtic Beltane festivals. A huge pole is decorated with flowers and wreaths, a potent symbol of the fertility of summer. Then, boys and girls hold on to ribbons connected to the pole, and dance opposite ways, interwinding their ribbons as they duck and dive between each other. The dance seems to perfectly symbolize life, and the interwinding of masculine and feminine energies. The pattern was also believed to indicate patterns of the harvest, and may have been a sort of tool for divination.
The history of the May Pole and May Day have their roots in Beltane. Today May Day has many different meanings, and has found it’s place in Christianity, International Workers’ Day movements, Labour Day, and as a much needed bank holiday weekend. For some, May Day will be a time for relaxing, but for others’ it will be a time for celebrating the forces of life overcoming death, light overcoming darkness, and summer overcoming winter.
By Matthew Warburton
Sources:
LibCom
Britannica
Washington Post
WesternGazette
IWW
WitchVox 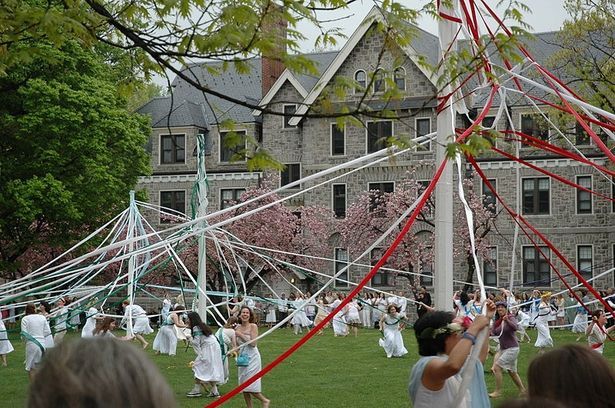 MAY DAY – The International Labor Day

Mayday: A LOVE Message
Posted on May 1, 2015 by RonMamita — Leave a comment

Millennia of experiences from ancient pre-history till this moment the message of LOVE survives to touch our lives.
Conscious Intention
Decide for yourself: Born To LOVE, or Conscious intention to LOVE, or not… ~Ron

“Love is the first born, loftier than the Gods, the Fathers and men. You O Love, are the eldest of all, altogether mighty. To you we pay homage! In many forms of goodness, O Love, you show your face. Grant that these forms may penetrate our hearts.” -Atharva Veda IX 2.19
“For this is the message that ye heard from the beginning, that we should love one another.” – King James Bible 1 John 3:11
“You cannot guide the ones you love. God is the only One who guides in accordance with His will, and in accordance with His knowledge of those who deserve the guidance.” Quran 28:56 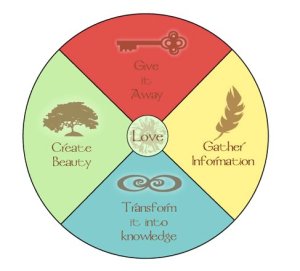