Bees Declared Endangered in the U.S. 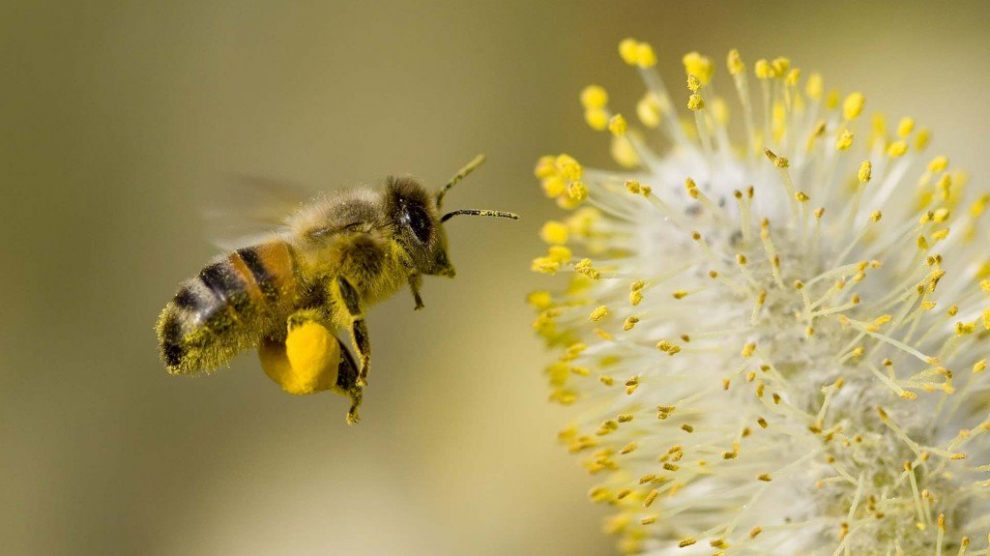 As the legend goes, when star-crossed lovers Naupaka and Kaui knew they’d be forever separated, Naupaka took the flower from behind her ear and tore it in two pieces, keeping one and giving Kaui the other.
As she went to the mountains, and he to the sea, the plants around them felt their sorrow, and from then on bloomed only in half-flowers.
Such is the Hawaiian myth behind the naupaka, a beach shrub native to the islands whose flowers look like they’re missing half of their petals.
Now the plants are linked to another sad event: Their primary pollinators, a group of more than 60 yellow-faced bee species in the genus Hylaeus, are disappearing fast. So fast that on September 30, the U.S. Fish and Wildlife Service deemed seven Hylaeus species as endangered—the first bees ever on the list. (See seven intimate pictures that reveal the beauty of bees.)
In the early 1900s, yellow-faced bees were the most abundant Hawaiian insects, ranging from the coastlines to the mountains and even the subalpine slopes of Mauna Kea.
Yet habitat loss, invasive species, and climate change have hit Hawaii’s only native bees so hard that they’re now one of the state’s least observed pollinators. Only two known populations of H. anthracinus, one of the most studied species, remain on the island of Oahu, and a few small populations are scattered across several other islands, according to recent surveys.
“What we saw was really alarming—the bees were doing a lot worse than we thought,” says Cynthia King, an entomologist with Hawaii’s Division of Forestry and Wildlife.
In 2010, the state government stepped up efforts to learn more about the bees. Around the same time, the invertebrate nonprofit Xerces Society submitted a petition to federally protect seven yellow-faced bees. Saving these species is a “necessary part” of the White House’s strategy to protect pollinators, says Xerces executive director Scott Black.
“We should protect the rarest of the rare.”
Ignored Insects
The six-millimeter-long, solitary bees—so named for the golden mark between the males’ eyes—are the only bees from Hawaii.
Even so, they flew largely under the radar until around 1995, when Karl Magnacca, now a postdoctoral researcher at the University of Hawai’i, noticed bees buzzing in his house on the Big Island. When he looked up the insects up in recent scientific literature, he came up virtually empty.
“That was surprising, since bees in general are an important group. [Yellow-faced bees] have been ignored since the 1920s.”
Magnacca decided to do his Ph.D. on the bees, and in the process discovered ten new species, as well as mapped out where the various species live in Hawaii—”sparking a renaissance of interest in them,” he says. (Read “Quest for a Superbee” in National Geographic magazine.)
The bees have possibly gone overlooked in part because they look like wasps.
For one, they’re fast—if a bee passes you, all you’ll likely see is a little black squiggle, Pigpen-style, according to King, the state entomologist. The insects also have black, shiny bodies, without that classic bee fuzz.
Deadly Invaders
To figure out the life cycle of this little-seen insect, University of Hawai’i entomologist Jason Graham has studied—for the first time—where H. anthracinus lives and nests on Honolulu’s Ka Iwi coast and in the James Campbell National Wildlife Refuge on the North Shore.
He found that the bees like to nest in holes in coral rocks that have washed ashore or in the hollow stems of a few coastal plants. After laying eggs, females seal the holes with a type of waterproof cellophane.
Graham has also observed an invasive bee from India—ironically from the same genus—competing with the native bees, nesting in the same plant cavities and foraging on the same flowers.
Invasive species in general are devastating—in addition to these rival Hylaeus bees, yellow-faced bees must contend with alien ants. (Hawaii has no native ant species.)
Highly efficient foragers and predators, ants see a yellow-faced bee nest, with its beefy larvae, “as an amazing little buffet,” says King.
Giving Bees a Boost
By dissecting nests and measuring their sizes, as well as raising bees in the lab, Graham has developed an artificial nest box that allows bees in and keeps ants out.
“The artificial nests are wooden blocks with pre-drilled holes that match the hole size female bees look for when home-shopping for a nest spot,” he says. The cord that attaches the nest blocks to a branch is then covered with a sticky substance that prevents crawling predators, like ants, from getting inside.
Read More

» Animal Success Stories Prove Why We Need To Protect The Endangered Species Act
» Endangered Earth
» 10 Most Endangered Rivers Put Tens of Millions of Americans at Risk
» Scientists: Earth Endangered by New Strain of Fact-Resistant Humans
» What Is Going On? Bees Are Spinning, Dropping Dead In California and UK