The CIA publishes declassified documents about pyramids and a lost civilization on Mars Wed Mar 08, 2017 10:38 am


In January, the Central Intelligence Agency of the United States, the CIA, published online more than 12 million pages of declassified documents. Among them, ufologists have found a very interesting document which details a paranormal experiment which revealed fascinating details about Mars.

The document titled “Exploration of Mars” dates back tp 22 May 1984 and contains the transcript of an experiment carried out by a CIA. The agency focused their research on specific coordinates on Mars: 40.89 degrees North / 9.55 degrees West among others.

As reported by the Mirror, during the interview, the psychic used in the CIA experiment is said to have accurately described the surface of Mars – and aliens that used to live there.

The CIA agent in charge of writing the transcript wrote a date and coordinates on paper, then placed the paper in an envelope and sealed it. The sealed envelope was delivered to the ‘psychic’, who was warned that the experiment would be related to geographic coordinates, although no further specifications were given.

The note written by the Cia agent reads:
‘The Planet Mars’
‘Time of interest approximately 1 million years B.C.’
After providing the medium with the above-mentioned details, the agent asked him to concentrate on the data.
The subject saw the following:

“…I want to say it looks like ah… I don’t know, it sort of looks… I kind of got an oblique view of a, ah… pyramid or pyramid form. It’s very high, it’s kind of sitting in a… large depressed area.”

When asked about the surface of the planet by the CIA agent, the subject responded:

“I am tracking severe, severe clouds, more like a dust storm, ah… it’s geologic problem. Seems to be like a, ah… Just a minute, I’ve got to iron this out. It’s really weird. I’m looking at, at a…after effect of a major geologic problem.” 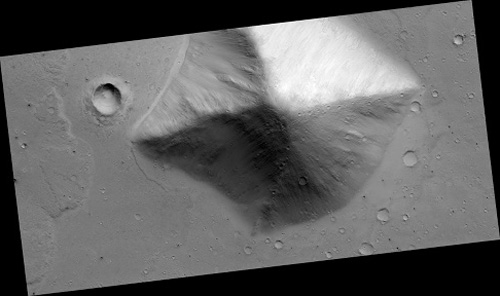 Ummm… Is that a ‘Pyramid’ on Mars?

Interestingly, coordinates indicated to the subject by the agent correspond to the Martian region of Cydonia Mensae, where ufologists, according to The Mirror, have detected “artificial pyramidal forms”.
These enigmatic ‘structures’ are visible with the help of satellite imagery using Google Earth.
The Cia agent asked the subject to go back to the time before the ‘geological problem occurred on Mars’:

“…I am seeing ah… It’s like a perception of a shadow of people, very tall…thin, it’s only a shadow. It’s as if they were there and they’re not, not there anymore.”

The Cia Agent then asked the medium to go further back to the time when ‘they’ were there:

“…Um…(mumble) It’s like I get a lot of static on a line and everything, it’s breaking up all the time, very fragmentary pieces.”

The CIA agent then asked the subject to report only raw data:
The subject responded:

The document goes further on detailing extremely interesting information on Mars.
Interestingly, in recent years numerous scientists have spoken out about Mars and how there is enough data to suggest that in the distant past, Mars was in fact inhabited by one (or more) intelligent civilizations.
According to Dr. John Brandenburg—who has a Ph.D. in Theoretical Plasma Physics from the University of California, and worked for NASA— there is enough evidence to prove that at least two major nuclear blasts went off on the surface of the red planet in the distant past. According to Dr. Brandenburg, ancient Martians known as Cydonians and Utopians were massacred in the giant nuclear attack – and evidence of the genocide can still be seen today.
The entire document can be found here CIA Library.
Source