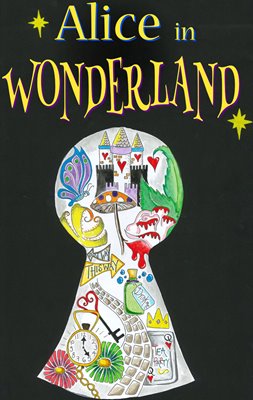 Emigrate While You Still Can...

Each door represents an amnesia wall. Behind each door sits a personality with their own neural circuitry. As the Gatekeeper, Intellectual Alice was able to unlock the doors. To access the doors and these compartmentalized brain sections, I did as follows:
I visualized falling backwards through the rabbit hole with 10-year-old Intellectual Alice. I knew the landing on the checkered floor to be hard and painful, so I said to Alice, “The landing doesn’t have to be hard. We can make it soft because we are in our head and can control what happens in our head.”
After landing, I asked Intellectual Alice to locate the key to the green door, which she did. Alice unlocked the door and I accompanied her to the fully laden Tea Party. I used my redundant counseling skills to communicate with Alice and win her trust. I asked her, “Have you ever actually sampled this spread?”
She shook her head.
I suggested, “Why don’t you pour yourself a cup of tea? You like watching the way the tea comes out of the spout and into the cup. I know that because I am you.”
We watched the black tea arc into the cup. Then I said, “Why don’t you eat something? Go on, try a doughnut. I know they are your favorite.”
Long story short – we returned to the foyer. There Alice retrieved a second key from beneath a mat in front of the red door. She opened the door and released 6-year-old Ritual Alice. Ritual Alice stood on Intellectual Alice’s shoulders to retrieve a third key hidden in the chandelier. Ritual Alice opened the blue door to release 14-year-old Soldier Alice. Note that all three Alice’s were created at ages at which I interacted with Gittinger.
Together, the three Alices opened the white door to reveal a cloud of hypnosis. When this cleared, 12 year old Dorothy appeared. She had a fourth key in her right pocket. All four keys were designed according to playing cards: heart, club, spade and diamond.
Dorothy opened the final, yellow door which contained the spiraled yellow brick road to the Emerald City. Here is a drawing of the opened doors:

The 3 Alices plus Dorothy joined hands and followed the yellow brick road to the Emerald City. We avoided all obstacles on the way, including:

When we reached the Emerald City gate, I recalled and tapped a sequence and sang a five-note tune to gain entry. Once inside, the spiral turned green. We boarded the carriage pulled by the horse that changes colors. We avoided the Wizard which is a trap, and the Ruby Slippers – the final trap.
Once we reached the end of the spiral, Glinda appeared in a bubble. Glinda is the final programmed alter. Here is my drawing of the Oz maze:

Glinda is the Grande Dame program, she is ‘Illuminated’ which indicates she is a member of the Illuminati. Glinda was attached to Disney Princess Programming, including the following characters:

In the context of Grande Dame preparation, the purpose of the Princess Programming is – ‘The end justifies the means.’ I will explain. Every princess loses her mother, father, or both. Each endures hardship of some kind, usually at the hands of a wicked step-mother (the original Sleeping Beauty suffered an evil mother-in-law). But at the end of their ordeal, each marries a prince and becomes Queen.
In a Cult context, this story line translates into the journey a Grande Dame candidate undertakes. The child victim’s attachment to their birth parents is severed and they are reattached to a Grande Dame and a new ‘Family’ who put the victim through a grueling, torturous training regime. But in the end, the victim is ‘rewarded’ for all their pain and suffering by being crowned Grande Dame.
Here is my illustration of this:

So, that’s what I cognitively processed within 24 hours. This demonstrates the complexity of MK-ULTRA programming and my understanding of it. I hope this post helps other victims of ritual abuse and mind control tackle and unravel their own programming.
This article first appeared at Fiona Barnett.