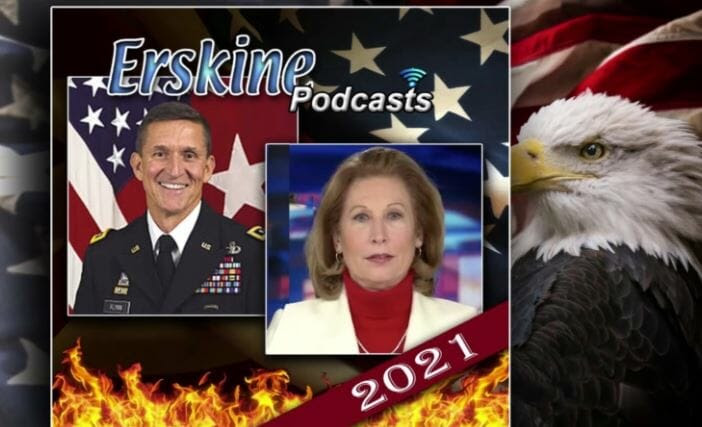 Source: Jim Hoft
On Saturday Attorney Sidney Powell and Retired General Michael Flynn joined Erskine for his weekly podcast.
Lieutenant General Michael Flynn is a retired United States Army Lieutenant General who was the 25th United States National Security Advisor for President Trump. Flynn’s military career included a key role in shaping U.S. counterterrorism strategy and disarming insurgent networks in the Afghanistan and Iraq wars and was given numerous combat arms, conventional, and special operations senior intelligence assignments. His book, The Field of Fight, is brilliant. http://www.defendingtherepublic.org
Sidney Powell served in the Department of Justice for 10 years and for the last 20 years has devoted her private practice to federal appeals. She was the youngest Assistant U.S Attorney and later became Chief of the Appellate Section for the Western and Northern Districts of Texas. Sidney Powell is recognized by her peers as a “Super Lawyer” and named as one of the “Best Lawyers in America”. Her Amazon best-selling book Licensed To Lie reads like a legal thriller. Her latest book is CONVICTION MACHINE: Standing Up to Prosecutorial Abuse. Learn the TRUTH about the 2020 election and what it means to America
Sidney Powell had this to say to open the conversation. “Well, Erskine from my perspective it looks like the complete breakdown of every institution of law enforcement and the rule of law that we have trusted in this country since its inception to protect the law and the citizens from abuses by the government.
As far as the last election Sidney Powell had this to say, “There’s all kind of precedent for fixing what happened in this election from Bush vs. Gore to other cases as well… Fractionalized votes. That’s exactly what we have here from a computer algorithm that we can prove in multiple counties and it could prove across the country if anybody would issue an order allowing inspection of the machines. The very fact that Dominion and other companies are not allowing inspection of the voting machines ought to tell everybody all they need to know. Federal law calls for election records to be kept for 22 months… In this case it requires forensic evaluations of the machines and looking at all of the paper ballots. We already know that’s not going to match up. There were counterfeit ballots. People were saying, “Oh, well they did a full audit in Georgia.” Well, if you just keep running the same counterfeit bill through the same counting machine you’re going to get the same result.
Sidney then dropped this bomb, “There is enough evidence in the cases before them or enough evidence in the public now to more than reverse the election in at least five states.”
That was just the first 7 minutes of the interview!