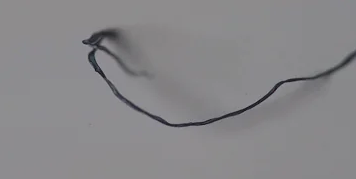 
We’ve truly entered “SciFi World”. Although it’s been a long time since I’ve batted an eye about topics like UFOs, even I am having cognitive dissonance over some of things I’m reporting on lately, such as the prevalence of Satanic pedophilia and the use of adrenochrome, as major factors in the child sex trafficking and the crisis on the US southern border that we’re now seeing. It all sounds like crazy talk but apparently, it’s not.
The latest crazy story is that there are parasitic worms on facemasks and COVID swabs, which is now confirmed, to the absolute horror of a medical doctor in the UK, who practiced for years as an emergency room doctor and as an otolaryngologist and who was also a teacher of anatomy and related subjects at a medical school. She goes by “Dr T” and does not mention here the names of the institutions where she studied and worked, presumably to protect the identities of those associated with her.
She says that after her teen-aged son showed her the videos of moving black strands that we’ve seen and after watching numerous such videos herself, Dr T assumed these were hoaxes.
To prove this, she and her son looked at some masks together under a microscope, which was easy, because her husband practices as a dentist and his office had access to several batches and brands of surgical face masks.
To her shock, each of the seven individually-sealed masks she tested from five different factories, packed in completely sealed boxes from the UK’s National Health Service (NHS) was contaminated with parasites.
Furthermore, she could not chalk up the worms’ movements to anything “electrostatic”. She was 100% convinced that they were alive, saying, “I am not in any doubt that I have seen living organisms in NHS masks,” while also acknowledging that she is not a microbiologist and that she’d like to see specialists in Parasitology looking at these, to see if they are dormant organisms that come to life when exposed to warmth, humidity and CO2.
“I’ve kind of done the odds on this. There is no way that coincidence could make all five of those contaminated, unless there is widespread contamination. So, that’s why I’m here…there’s no other medics speaking out about this. I don’t know why. I don’t now if they’re busy and they don’t end up seeing these videos on the internet, so they don’t even know there’s a problem…
“We have got to absolutely call to action everybody who has access to a microscope – a proper microscope, in a lab – needs to look at masks. Everybody who knows somebody who works in a lab needs to tell them….I want to be wrong that it’s widespread. I want this to be the most incredible, rare statistic, ever; that me and these other people around the world were unlucky and that this is not what it appears to be.”
Dr T bought a high-quality microscope and together with her husband took clear video, seen here of this microscopic black strand/worm moving, while the cotton fibers beside it remained stock still. She says that a microbiologist to whom she sent her photos told her that in his opinion, these are flat worms from the Platyhelminths family. (One wonders if this could be why Ivermectin has been found to be so effective against the “coronavirus”?)
Mark Playne, her interviewer says, “The cognitive dissonance for everybody will be so high on this. We’re all going to presume that it’s absolutely not possible. That’s the basic presumption; that a product that’s been built to create safety could be contaminated in this way, having the completely opposite effect – well, beyond opposite effect…which is sinister beyond words.”
Myself, I can’t help thinking that Taenia (tapeworms) could be bioengineered to function as a method to implant a tracking device. Tapeworms have adapted for millions of years to thrive in the human intestinal tract, where they can live undetected for upwards of 25 years at a time, entering via the mouth with diseased food.
And let’s not forget that the CCP insisted on giving anal swabs to “test” US diplomats in China for COVID – a respiratory disease!
Ten years ago, Sofia Smallstorm went on a speaking tour about the “Dark Agenda of Synthetic Biology” and how this new frontier of science combines genetics, robotics and nano-technology with wireless communications signals (5G) and artificial intelligence, hybridizing natural forms and engineering tissues beyond our wildest dreams.
It was widely believed that aerosol spraying (chemtrails) distributed the carbon nanotubes, which self-assemble into the black strands seen in Morgellons disease, when activated by specific electromagnetic frequencies. Last Monday, State of the Nation published a very disturbing article, covering much of this.
Dr T says, “There is a chance that there is exceptional wrongdoing involved, because, as I said, if this is just a dirty, dirty factory, why is there not dirt on them? In which case, if we are taking about that, we must all now do everything that we can…we’ve got to take this as seriously as we possibly can but what I don’t want to do is to move people into a state where there has already been too much fear around; to move them from a fear of the virus to a fear of a worm.
“So, I just want to recognize the enormous amount of emotions that I have gone through since finding these and to remind us that in our own bodies, we’ve got hundreds of microorganisms that not only live happily with us, they help us to live. This doesn’t look like one of those.”