As of late Saturday, the crossings had completely stopped after the DPS blocked access using vehicles and a rudimentary barbed-wire barrier. Just hours before, Breitbart Texas visited the camp by boat and witnessed the non-stop crossings of newly arriving migrants and those using the dam to bring in food and other supplies from Ciudad Acuna, Coahuila. 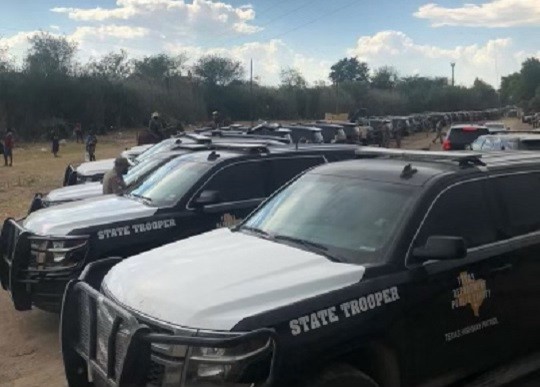 Dozens of Texas DPS Highway Patrol vehicles line up to stop the flow of migrants into the makeshift camp in Del Rio, Texas. (Photo: Texas Department of Public Safety)
Although the migrants are being provided food and water by the Border Patrol and local authorities on scene, many chose to seek their own provisions from Acuna. Migrants also brought cardboard and other materials used to construct primitive shelters alongside the international bridge. Many have spent more than a week in the shelter. As Breitbart Texas first reported, the migrants began arriving in significant numbers earlier this month.Randy ClarkVolume 90%
There are other areas that are being used by the migrants to ford the river, but none provide the shallow, easy access that the dam afforded. Bringing goods and supplies into the camp from Mexico will be near impossible without access to the dam. Authorities have been worried about tension building up in the camp as the population continues to swell. 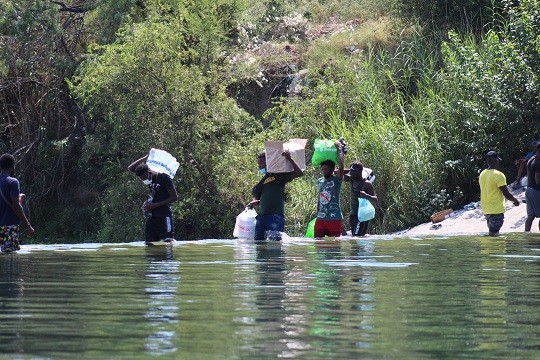 Migrants carry supplies from Mexico across the dam to the makeshift camp in Del Rio, Texas. (Photo: Texas Department of Public Safety)
The troopers and Guardsmen, deployed as part of Texas Governor Gregg Abbott’s Operation Lone Star have been dispatched to border communities since March. The contingent of more than 1,000 Highway Patrol troopers and Texas Army National Guard soldiers have focused primarily on blocking major migrant crossing points and increasing patrols along state highways leading away from the border. 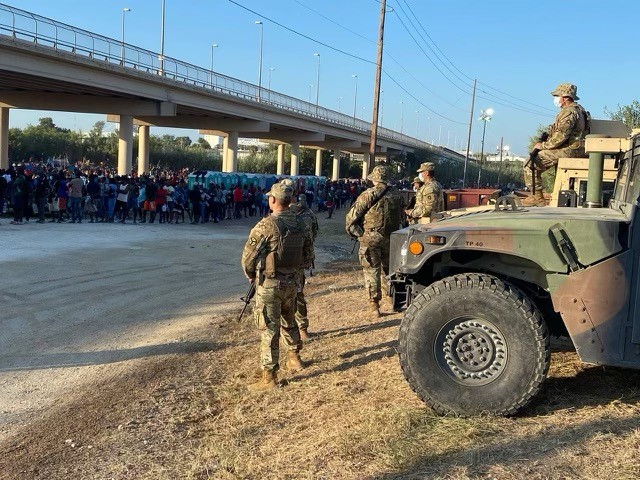 Texas National Guard troops stand by to assist outnumbered Border Patrol agents as more than 12,000 migrants are detained in Del Rio, Texas. (Photo: Office of the Texas Governor)
Local hotels in the Del Rio area have been at capacity due to the surge of additional law enforcement officers brought in to help increase security at the camp. Several troopers unable to find accommodations in the area are being hosted by a local resident according to a source within DPS. 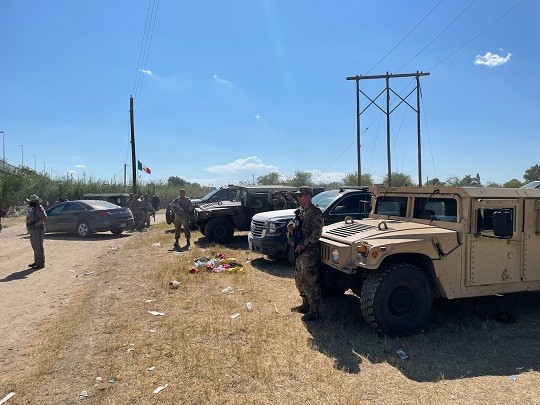 Texas DPS troopers and National Guard soldiers stand watch at the migrant camp under the Del Rio International Bridge. (Photo: Office of the Texas Governor)
The U.S. Department of Homeland Security proposed a six-point plan to address the situation at the camp. The plan involves the closure of two Ports of Entry in Del Rio, a surge of 400 additional Border Patrol agents, improvements to conditions at the camp, and diplomatic efforts to remove the migrants to other countries.
Two removal flights to Haiti are slated to begin on Sunday and continue at that pace for six days each week.