Astrobiologists Call for New Framework in Search for Extraterrestrial Life

Astrobiologists Call for New Framework in Search for Extraterrestrial Life Tue Nov 09, 2021 10:16 am

The question of whether we are alone in the Universe has been a source of wonder for humanity for millennia or more. Advances in planetary sciences, astronomy, biology and other fields now leave us poised, as never before, to address this question with scientific rigor. Numerous challenges confront this endeavor, including challenges of perception and communication. Evidence of extraterrestrial life may be subtle or unfamiliar, and reveal itself only in stages, as one observing campaign informs the next. However, the search for such evidence is often framed as an all-or-nothing proposition: either a mission returns definitive evidence of life or it has fallen short of its objective. In a new paper published in the journal Nature, astrobiologists from NASA and the University of Maryland aim to motivate and seed the discussion with basic considerations and offer an example of how such considerations might be incorporated and applied in a proof-of-concept-level framework. 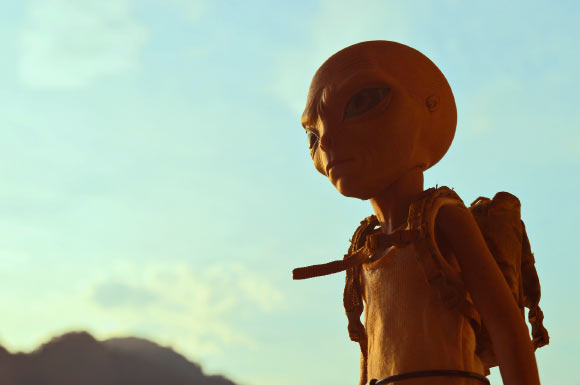 Our generation could realistically be the one to discover evidence of alien life. Image credit: Fernando Ribas.
“Having a scale like this will help us understand where we are in terms of the search for life in particular locations, and in terms of the capabilities of missions and technologies that help us in that quest,” said NASA’s chief scientist Dr. Jim Green.
“The scale contains seven levels, reflective of the winding, complicated staircase of steps that would lead to scientists declaring they’ve found life beyond Earth.”
As an analogy, Dr. Green and his colleagues point to the Technology Readiness Level scale, a system used inside NASA to rate how ready a spacecraft or technology is to fly.
“Until now, we have set the public up to think there are only two options: it’s life or it’s not life,” said Dr. Mary Voytek, head of NASA’s Astrobiology Program at NASA Headquarters.
“We need a better way to share the excitement of our discoveries, and demonstrate how each discovery builds on the next, so that we can bring the public and other scientists along on the journey.”
The field of astrobiology pursues some of the most profound questions that anyone could ask, regarding our origins and place in the Universe.
As scientists learn more and more about what kinds of signals are associated with life in diverse environments on Earth, they can create and improve upon technologies needed to find similar signs elsewhere.
While the exact details of the scale will evolve as astrobiologists, communicators, and others weigh in, the team’s paper offers a starting point for discussion.
At the first step of the scale, ‘Level 1,’ astrobiologists would report hints of a signature of life, such as a biologically relevant molecule. An example would be a future measurement of some molecule on Mars potentially related to life.
Moving up to ‘Level 2,’ scientists would ensure that the detection was not influenced by the instruments having been contaminated on Earth.
At ‘Level 3’ they would show how this biological signal is found in an analog environment, such as an ancient lakebed on Earth similar to Jezero Crater, the landing site of NASA’s Perseverance rover.
To add evidence to the middle of the scale, scientists would supplement those initial detections with information about whether the environment could support life, and rule out non-biological sources. For Mars in particular, samples returned from the planet could help make this kind of progress.
Perseverance will soon be collecting and storing samples with the goal of a future mission returning them one day.
Since different teams on Earth would have the opportunity to independently verify hints of life in Mars samples with a variety of instruments, the combination of their evidence could achieve ‘Level 6,’ the second highest step on the scale.
But in this example, to reach ‘Level 7,’ the standard by which scientists would be most sure they had detected life on Mars, an additional mission to a different part of Mars may be required.
“Achieving the highest levels of confidence requires the active participation of the broader scientific community,” the scientists said. 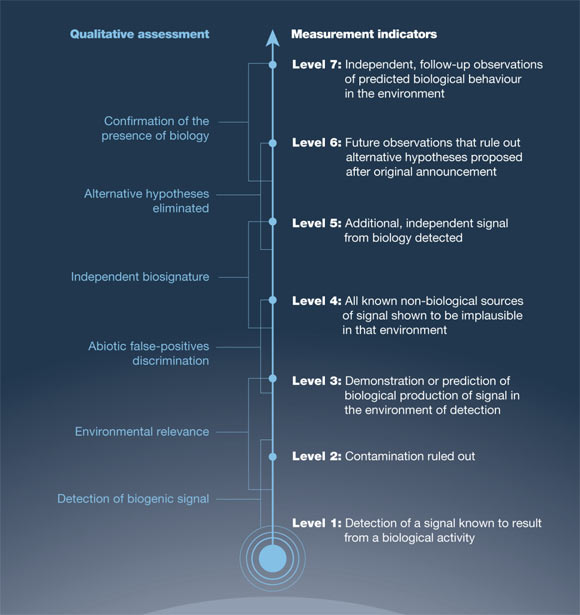 An example of a progressive scale for communicating the nature of results that may provide evidence for life. Image credit: Green et al., doi: 10.1038/s41586-021-03804-9.
This scale would apply to discoveries from beyond the Solar System, too.
Detecting oxygen in the atmosphere of an exoplanet would be a significant step in the process of searching for life.
We associate oxygen with life because it is made by plants and we breathe it, but there are also geological processes that generate oxygen, so it is not proof by itself of life.
To move upward on the scale, a mission team could demonstrate that the oxygen signal was not being contaminated by light reflected from Earth and study the chemistry of the planet’s atmosphere to rule out the geological explanation.
Additional evidence of an environment that supports life, such as an ocean, would bolster the case that this hypothetical planet is inhabited.
Scientists who study exoplanets are eager to find both oxygen and methane, a combination of gases in Earth’s atmosphere indicative of life. Because these gases would lead to reactions that cancel each other out unless there are biological sources of both present, finding both would be a key ‘Level 4’ milestone.
To reach ‘Level 5,’ astronomers would need a second, independent detection of some hint of life, such as global images of the planet with colors suggestive of forests or algae. They would need additional telescopes or longer-term observations to be sure they had found life on an exoplanet.
The study authors emphasize that the scale should not be seen as a race to the top.
The scale emphasizes the importance of the groundwork that many NASA missions lay without directly detecting possible biological signals, such as in characterizing environments on other planetary bodies.
Upcoming missions such as Europa Clipper, an orbiter headed for Jupiter’s icy moon Europa later this decade, and Dragonfly, an octocopter that will explore Saturn’s moon Titan, will provide vital information about the environments in which some form of life may one day be found.
“With each measurement, we learn more about both biological and non-biological planetary processes,” Dr. Voytek said.
“The search for life beyond Earth requires broad participation from the scientific community and many kinds of observations and experiments.”
“Together, we can be stronger in our efforts to look for hints that we are not alone.”
_____
J. Green et al. 2021. Call for a framework for reporting evidence for life beyond Earth. Nature 598, 575-579; doi: 10.1038/s41586-021-03804-9
This article is based on text provided by the National Aeronautics and Space Administration.

» Giant telescope to join the search for alien life
» Perseverance Begins Search for Signs of Ancient Martian Life
» NEW SEARCH FOR ALIEN LIFE - PROF. STEVEN HAWKING ANNOUNCES - ArtAlienTV - 1080p
» "i got a call that was one of the best i have ever had in my life... ":Jester
» "G.C.R. IMMINENT!!!!": Exogen