OUT OF MIND » BREAKING NEWS & HOT TOPICS » THE GREAT RESIST » Europe’s lockdown fury: Violence breaks out in Vienna as 10,000 protesters take to streets and 1000s more march in Amsterdam after 2 shot in Rotterdam

Europe’s lockdown fury: Violence breaks out in Vienna as 10,000 protesters take to streets and 1000s more march in Amsterdam after 2 shot in Rotterdam

Europe’s lockdown fury: Violence breaks out in Vienna as 10,000 protesters take to streets and 1000s more march in Amsterdam after 2 shot in Rotterdam 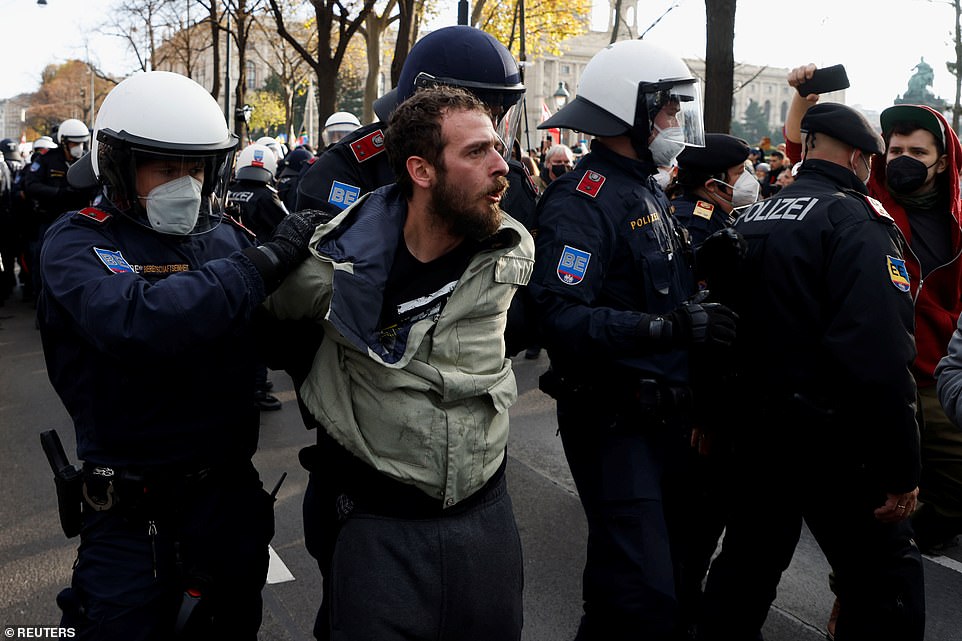 AUSTRIA: Police officers arrest a protester during a demonstration against new Covid-19 restrictions, including a lockdown from Monday and mandatory vaccines from February 1
Scoopy Web
Violence today broke out in Vienna as 10,000 protesters took to the streets to demonstrate against a new Covid-19 lockdown and mandatory vaccinations.
It comes after two people were shot and six others injured in Rotterdam last night after activists clashed with Dutch riot police in a demonstration condemned as an ‘orgy of violence’.
Demonstrations against virus measures are also expected in other European countries including Switzerland, Croatia and Italy – the latest in rising anger at the re-introduction of restrictions amid soaring cases on the continent.
This comes as the World Health Organization (WHO) said it was ‘very worried’ about the spread of Covid-19 within Europe as the continent battles a fresh wave of infections.
Regional director Dr Hans Kluge told the BBC that some 500,000 more deaths could be recorded by March unless urgent action is taken.
As the march kicked off on Vienna’s Heldenplatz, thousands of protesters gathered on the massive square. About 1,300 police officers were on duty. They used loudspeakers to tell protesters masks were required, but most did not wear them.
Chanting ‘resistance!’ and blowing whistles, protesters began to move slowly down the city’s inner ring road. Many waved Austrian flags and carried signs mocking government leaders like Chancellor Alexander Schallenberg and Health Minister Wolfgang Mueckstein.
Some wore doctor’s scrubs; others donned tinfoil hats. Most of the signs focused on the newly announced vaccine mandate: ‘My Body, My Choice,’ read one. ‘We’re Standing Up for Our Kids!’ said another.
By mid-afternoon the crowds had swelled to roughly 35,000 people, according to the police, and were marching down Vienna’s inner ring road before heading back towards the Hofburg.
Police were pictured arresting two protesters. A spokesman said there had been fewer than 10 arrests, for breaches of coronavirus restrictions and the ban on Nazi symbols.
Meanwhile, a few hundred protesters gathered in Amsterdam today and a similar number marched through the southern city of Breda over the latest Covid-19 measures.
It comes after violent riots last night in which 51 were arrested in Rotterdam after thousands of anti-lockdown protesters gathered on one of the city’s main shopping streets.
Dutch police fired water canons, ‘warning shots’ and bullets at protesters to disperse the crowd who had lit fires and set off fireworks. Police confirmed seven injuries, including officers, in the violence but did not say if live ammunition or rubber bullets were fired.
The Netherlands re-imposed some lockdown measures last weekend for an initial three weeks in an effort to slow a resurgence of coronavirus contagion, but daily infections have remained at their highest levels since the start of the pandemic.
The Dutch government has said it wants to introduce a law that would allow businesses to restrict the country’s coronavirus pass system to only people who are fully vaccinated or have recovered from Covid-19 — that would exclude people who test negative.
The violent scenes in Rotterdam mirrored much of the continent’s reaction to similar schemes announced by Austria, Germany, the Czech Republic, and Slovakia – with Italy and Greece also reportedly considering moves to restrict the movements of unvaccinated people.
[…]
Via http://www.scoopyweb.com/2021/11/europes-lockdown-fury-violence-breaks.html

Source: Rotterdam
Hundreds of people protested in Rotterdam against the government’s plans for stricter Corona rules on Friday. The police moved in to put down the uprising in large numbers, firing live ammunition at vaccine critics. At least seven people suffered injuries as a result.
On November 19, 2021, the protest in Rotterdam was described by the mainstream media as a “civil war” as citizens rose up against plans by the government to tighten Corona regulations in the country.
The undeclared rally turned into massive riots with hundreds of people on the streets, fires being lit on sidewalks, police cars set on fire and others damaged. Protesters threw objects at police officers and firefighters. According to their own statements, the police tried to restore order with a large contingent.
Riot police and a water cannon were sent in, and police units from all over the country were brought together in the port city but eventually, officers had to fire live rounds at protesters. Dozens of people were arrested. The police admitted on Friday evening: “There have been injuries in connection with the shots fired.”
A press photographer reported that dozens of shots were fired by the police: “There were shells everywhere on the ground.” He and a few others had fled to the nearest parking garage to take cover. He also said that protesters had smashed windows. 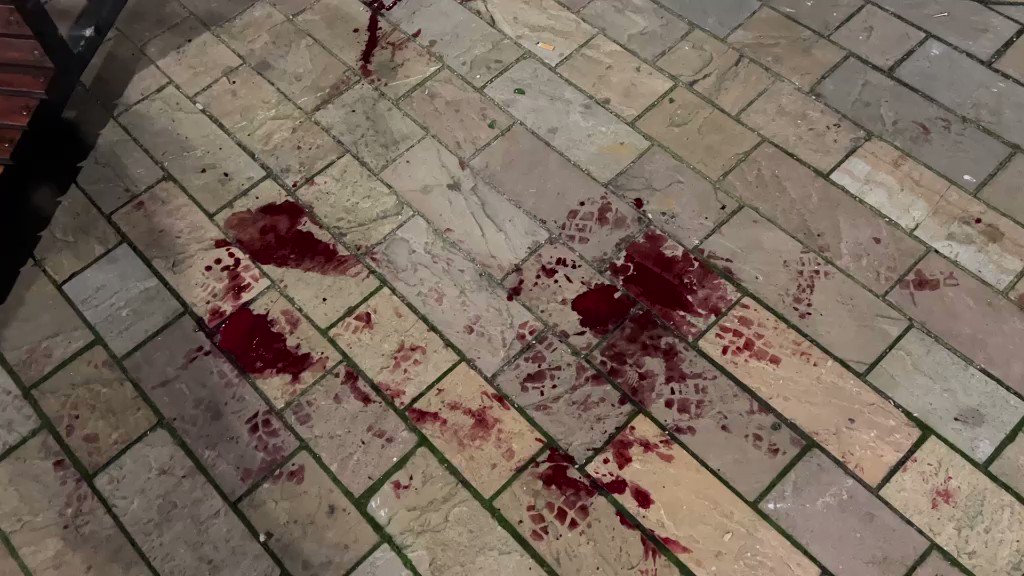 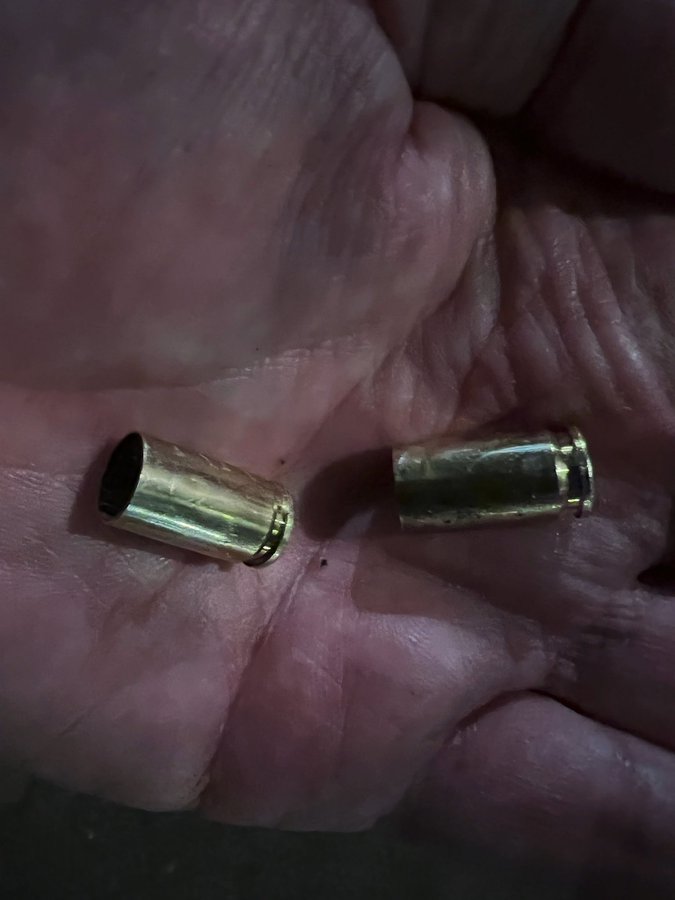 According to the newspaper De Telegraaf, at least seven people were injured. It was later reported that officers in the ranks of the police had also been injured.
Rotterdam Mayor Ahmed Aboutaleb issued an emergency ordinance to forbid people to stay at the site of the riots as well as in the main train station. The train traffic to and from Rotterdam was suspended because of the riots, said the Dutch Railways. Traffic only resumed early on Saturday morning but a trail of devastation remained.
The political climate has been tense
Pro-vaccine politicians claimed that they were “shocked” at the level of violence on Twitter, but pundits on BNR television had warned that the general political climate had deteriorated due to Corona dictates.
The rally, which several organizations had called, was directed against plans by the government to introduce a 2G rule designed to ostracise the unvaccinated. Access to events, cafés and restaurants will now only be possible for the vaccinated and those who have recovered from Covid-19.
After a curfew was imposed in the Netherlands in January, there were also violent protests in a number of cities with losses worth millions.
The police maintain that they had to use live ammunition in order to prevent more violence, but targeting Dutch citizens is not a very common thing, especially in immigrant-filled Rotterdam.
Minister of Justice and Security Ferdinand Grapperhaus expressed his alarm at the unrest: “Protesting is a great right in our society, but what we saw last night is simply criminal behaviour. It has nothing to do with demonstrating.”
The United We Stand demonstration, which was to take place in Amsterdam on Saturday afternoon, has now been cancelled. The organization has decided to do so after the riots in Rotterdam, according to their Facebook page. The municipality of Amsterdam confirmed that the demonstration would not take place.
Police justify live rounds
Meanwhile, various senior police officers tried to justify the shooting of civilians. Gerrit van de Kamp, chairman of the police union ACP told Dutch media: “What is going on here is indescribable.”
Jan Struijs, chairman of the Dutch Police Association, also expressed his dissatisfaction on Twitter. “It is a crisis in Rotterdam. Police officers do everything they can to protect their citizens, journalists, and the press. They pay a high price. Violence has established itself in our democracy.”
The director of the Rotterdam Rotterdam-Rijnmond Security Region, Arjen Littooij, says he was horrified to view the images in the center of Rotterdam.
President Gerrit van de Kamp of the ACP police union did not rule out the possibility that officers had fired because “the situation was extremely threatening and the officers were therefore forced to shoot”. He was also very displeased with the situation. “These are no longer riots, this is extremist behavior. This is no longer normal.” According to Van de Kamp, a lot of damage has been done, but his concern now was to give support to his colleagues in Rotterdam. “We hope the colleagues get home safely.”
Mayor Aboutaleb acknowledged that the police had no control over the situation on Friday. Eight riot squads from all over the country, with about four hundred officers, carried out several charges. In Twitter footage, mobs can be seen chasing law enforcement and police shooting at them to protect themselves.

OUT OF MIND » BREAKING NEWS & HOT TOPICS » THE GREAT RESIST » Europe’s lockdown fury: Violence breaks out in Vienna as 10,000 protesters take to streets and 1000s more march in Amsterdam after 2 shot in Rotterdam