Over the last six months, The War Zone has been deeply reporting on a set of bizarre patents assigned to the U.S. Navy. The patents, which are all the product of a single inventor, truly sound like the stuff of science fiction and include high-temperature superconductors, gravitational wave generators, compact fusion reactors, and high-energy electromagnetic field generators. Most radical of all is the “hybrid aerospace-underwater craft” claimed to be able to “engineer the fabric of our reality at the most fundamental level” by seemingly bending the laws of physics as we know them. Together, these patents seem to be the building blocks of a vehicle with truly out-of-this-world, UFO-like performance. As part of our reporting, we have been working to better understand the mind behind this mysterious intellectual property. Now, the elusive Dr. Salvatore Cezar Pais has spoken to The War Zone.
Despite the patents sounding extremely far-fetched, official documents show that the Chief Technology Officer of the U.S. Naval Aviation Enterprise personally attested to the reality of these inventions and their importance to national security and peer-state competition in appeals with the United States Patent and Trademark Office (USPTO). Meanwhile, the scientists and physicists we have talked to have made it clear that they find the claims largely absurd and not grounded in scientific fact. At the same time, there is, in fact, many decades of government research into similar technologies that are very much alike in concept to some of Pais's work. As such, while these are obscure ideas and remain on the edge of science, they are not exactly brand new.
All of this has led many to wonder what exactly is going on with these patents and a multitude of questions remain unanswered. Are the Salvatore Pais patents simply proactive, hoping to get ahead of the game for when or if these technologies actually become feasible? Are they part of a misinformation campaign designed to lead America’s adversaries on a fruitless wild goose chase? Could they be an attempt by the Navy to try to emulate seemingly unexplained craft with incredible capabilities that its personnel have encountered? Could the Navy really be on the verge of changing human technological progress as we know it? Or maybe they even represent a breakthrough that has already occurred. Then again, could they be just the flimsy product of a persuasive and imaginative inventor and his gullible Navy bosses?
The one person who would actually know the answer to these questions and more is Dr. Pais himself.

Dr. Pais recently published a new academic paper in the IEEE Transactions on Plasma Science journal detailing his work on his Plasma Compression Fusion Device. That device, the patent for which The War Zone has previously reported on, is a compact fusion reactor claimed to be capable of creating a net energy gain, a breakthrough that would revolutionize energy production if truly feasible.
Like all of Dr. Pais’s other patents and publications, the paper claims that this revolutionary new fusion reactor employs “controlled motion of electrically charged matter through accelerated vibration and/or accelerated spin subjected to smooth, yet rapid acceleration–deceleration–acceleration transients, to generate extremely high energy/high-intensity electromagnetic (EM) fields.” In the case of this reactor, those EM fields are claimed to both heat the plasma within the core and also confine and compress it, enabling energy production levels currently out of reach.
In the author section of the paper, it is stated that Dr. Pais has “advanced knowledge of theory, analysis, and modern experimental and computational methods in aerodynamics, along with an understanding of air-vehicle and missile design, especially in the domain of hypersonic power plant and vehicle design” as well as “expertise in electrooptics and emerging quantum technologies, particularly the laser power generation arena, and high-energy electromagnetic field generation, besides condensed matter physics, such as the emerging breakthrough field of room temperature superconductivity, as related to advanced field propulsion.”
The paper also contains a headshot of Dr. Pais, which confirms that a picture purporting to be Pais found on a Chinese news blog that we included in our previous reporting was indeed him after all. That image's provenance remains unknown. 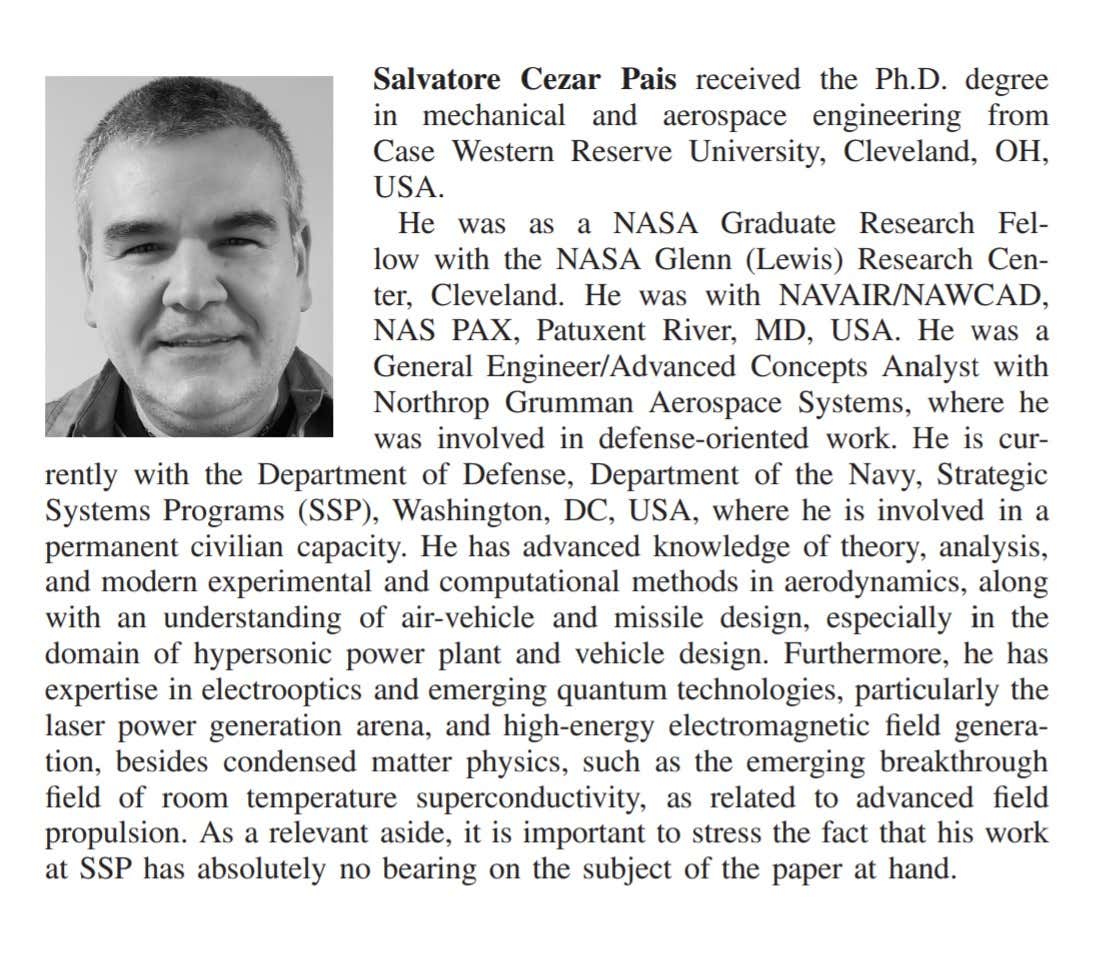 IEEE.ORG
A biography of Pais listed in his most recent publication in IEEE Transactions on Plasma Science.

The IEEE publication states that Dr. Pais is no longer with NAVAIR/NAWCAD, but now works at the U.S. Navy Strategic Systems Programs (SSP). According to its website, SSP covers the “entire spectrum of activities from research, development, building of hardware, training of crews, and construction of facilities, through the continued operational support” of America’s Trident submarine-launched ballistic missiles (SLBMs) and Ohio class and future Columbia class nuclear-powered ballistic missile submarines (SSBNs). In 2018, SSP announced it was developing a new “Prompt Global Strike Weapon,” now known as the Intermediate-Range Conventional Prompt Strike, which consists of a hypersonic glide body on top of a rocket booster that submarines or surface ships that could launch and that could potentially reach any target on Earth within an hour, depending on the location of the launch platform.
It remains unclear whether any of Dr. Pais's prior work at NAWCAD has migrated to his new position at SSP. From the sound of our correspondence, and by what we know about SSP's scope, it seems like this is very much a separate field of study. His transfer to this other research arm of the Navy is also puzzling. If Dr. Pais's patents were relevant, feasible, and if some of them were in actual testing as the Naval Air System's Chief Technology Officer assured the USPTO, why would that effort be stymied by a transfer to another unit?
It’s also worth noting the well-established trend of the U.S. military making use of the Invention Secrecy Act of 1951 to file patents unavailable for public viewing, under which the Navy has been the most prolific filer since 2017. It seems particularly notable that Pais's patents, which according to top Navy officials were of major national security interest, were filed publicly, though the reason why remains elusive. 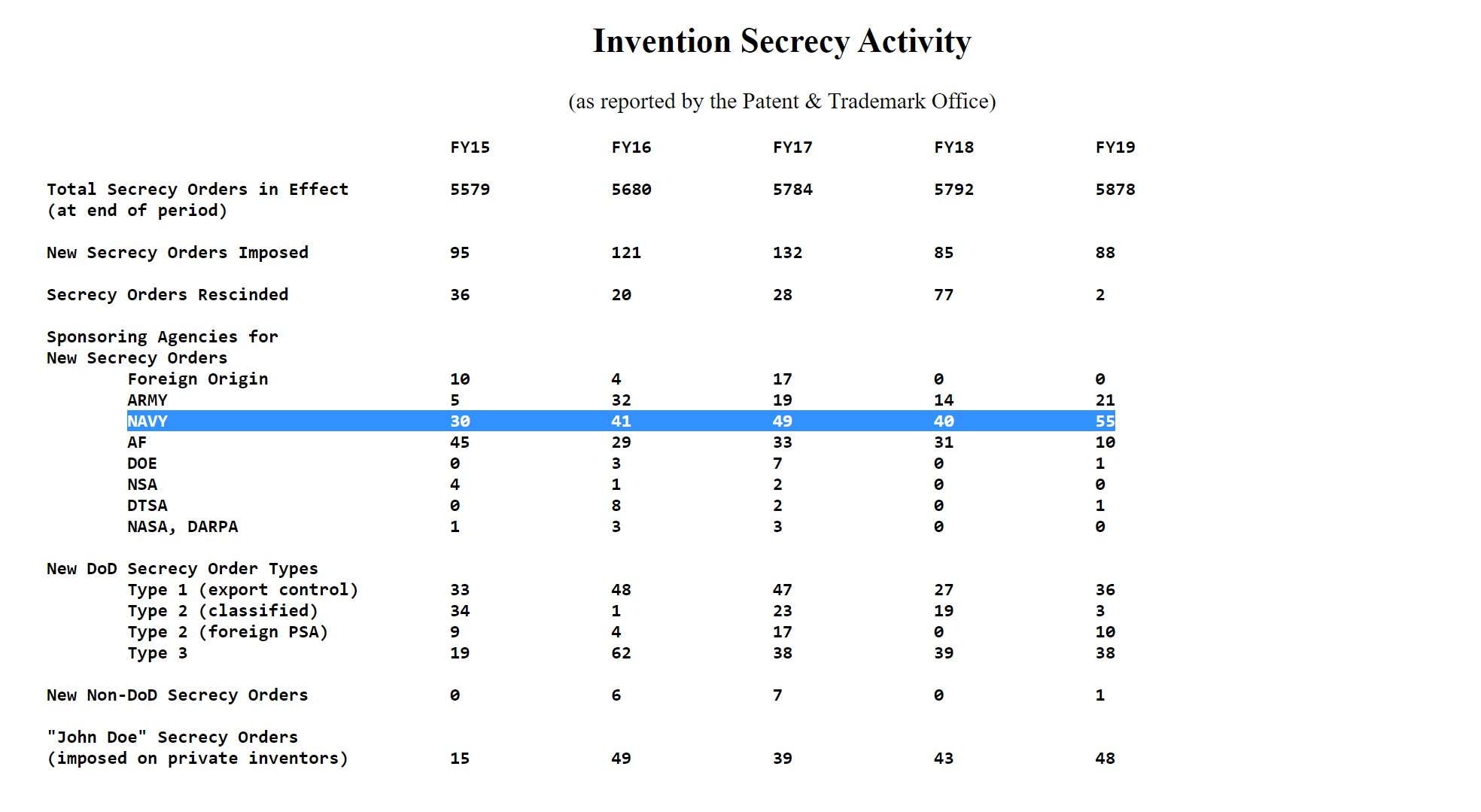 FAS.ORG
Data compiled by the Federation of American Scientists showing annual totals of inventions filed under the Invention Secrecy Act.

The War Zone has reached out to the Naval Air Warfare Center Aircraft Division (NAWCAD) and the U.S. Navy Office of Information to request more information about Dr. Salvatore Pais’s patents and a formal interview with Dr. Pais. So far we have been denied such opportunities. However, Dr. Pais did respond to a few questions directly by email recently and his replies only add to the curiosity and mystery surrounding these alleged wondrous technological breakthroughs.
We asked Dr. Pais to clarify his background, as little information and much confusion surrounds the identity of the man himself. Dr. Pais would only state what is already public record, that he is “a graduate of Case Western Reserve University, received all my degrees at that school -- BS '90; MS '93; Ph.D. '98 - all in Mechanical and Aerospace Engineering”, then adding that "More than this I cannot comment, thank you for your consideration.”
When The War Zone asked if Dr. Pais could comment on his patents or his research in general, he sent the following reply:

The fact that my work on the design of a Compact Fusion Reactor was accepted for publication in such a prestigious journal as IEEE TPS, should speak volumes as to its importance and credibility - and should eliminate (or at least alleviate) all misconceptions you (or any other person) may have in regard to the veracity (or possibility) of my advanced physics concepts.
Mr. Tingley, do realize that my work culminates in the enablement of the Pais Effect (original physical concept). The Pais Effect comprises the generation of extremely high electromagnetic energy fluxes (and hence high local energy densities) generated by controlled motion of electrically charged matter (from solid to plasma states) subjected to accelerated vibration and/or accelerated spin, via rapid acceleration transients.
Such high energy EM radiation can locally interact with the Vacuum Energy State (VES) - the VES being the Fifth State of Matter (Fifth Essence - Quintessence), in other words the fundamental structure (foundational framework), from which Everything else (Spacetime included) in our Quantum Reality, emerges.
The Engineering of the Pais Effect can give rise to the Enablement of Macroscopic Quantum Coherence, which if you have closely been following my work, you understand the importance of.
I must stress that all this work (patents, patent applications and technical papers) was conducted as a NAVAIR/ NAWCAD employee, and that my current position with Navy SSP has absolutely no bearing or in any way, shape or form has anything to do with this advanced physics work.
Thank you for your interest in my physics concepts, and try to keep an open mind in regard to my work.
Respectfully,
Sal
Salvatore Cezar Pais, Ph.D.
A.D. MMXIX

The email from Dr. Pais makes it clear that the inventor stands fully behind the science underlying these inventions, as radical as they sound. As we have explored in previous articles on Dr. Pais’s work, all of the patents stem from what the inventor is now calling the “Pais Effect,” the “controlled motion of electrically charged matter (from solid to plasma states) subjected to accelerated vibration and/or accelerated spin, via rapid acceleration transients.”
Despite Dr. Pais’s insistence that the Pais Effect is indeed a real phenomenon and the assurance that NAVAIR’s Chief Technology Officer gave the USPTO, we have been unable to find a single scientist or engineer who can corroborate the claims made in Dr. Pais’s patents. Nevertheless, in another correspondence, Dr. Pais assured The War Zone that “as far as the doubting SMEs [subject matter experts] are concerned, my work shall be proven correct one fine day…”.